You are at: Home News Trolls Bridge Now Available at More Casinos 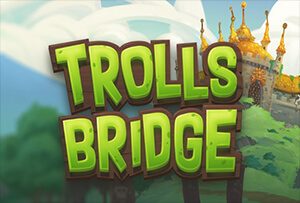 Following a period of exclusivity, Yggdrasil Gaming‘s Trolls Bridge video slot will now be available at all online and mobile casinos powered by the renowned developer.

This release features cartoon-style graphics and takes players to a world of trolls, where these fearsome beasts award cash prizes rather than eating people.

Trolls Bridge is a five-reel three-row video slot with 20 fixed paylines, playable for a mere $0.20 per spin. There’s the Golden Bet option available, which raises the minimum wager to $0.25, but also increases the average return to player, and offers riches prizes during the game’s Free Spins feature.

The main protagonists of this exciting release are four trolls, which are also the slot’s highest-paying symbols, with the most valuable troll awarding a payout worth up to 250 times the wager. Other icons, which pay far less, include playing cards.

There are four Wilds that can appear during the game – regular, sticky, random, and troll ones, but players should especially be on a lookout for the Bonus Pot symbol. This icon appears exclusively on the rightmost reel, but whenever it lands it will activate a feature of its own.

Win multipliers can bring up to 1,000 coins, while punters can also grab a number of free spins, along with a selection of additional features.

Players can benefit from a pick a card round, which offers additional spins, multipliers, as well as special wild features. With a bit of luck, this feature can prove to be very lucrative.

Commenting on the arrival of Trolls Bridge to a number of casinos, Yggdrasil Head of Slots, Jonas Strandman, said that the great combination of simple fun and great wins was what made the game stand out.

He pointed out the slot offered goofy characters running amok on the reels, as well as wins going up to 2,000 times the bet.

Strandman added the company had always known Trolls Bridge would be a hit, and since launching, its performance had confirmed these predictions. He stated that thanks to its success it gave Yggdrasil Gaming great pleasure to be able to offer the game to all its clients so even more players could enjoy this crowd favourite.