You are at: Home News Jumbo Stampede Arrives at iSoftBet-Powered Online Casinos 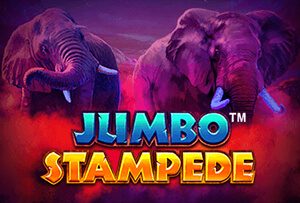 The London-based provider of online and mobile casinos games has announced that its Jumbo Stampede slot will now be available across online casino sites powered by the renowned developer.

Launched in December 2018, the game has initially been exclusively available at GVC casinos, but now a wider audience of players will be able to enjoy this thrilling title.

Punters will see herds of animals in this 6-reel, 4-row video slot offering 4,096 different ways to win and are sure to be dazzled by its engaging gameplay and potentially mammoth prizes it can bring.

A Safari of Spins

The reels are populated with symbols such as standard playing card icons, which offer lower-value prizes, while a plethora of wild animals from Africa will award higher prizes when they find their place on the reels.

Watch out for tigers, gazelles, zebras, and rhinos, but especially be on a lookout for a symbol featuring an elephant, as this is the game’s highest paying animal.

The setting sun serves as the game’s Wild symbol, substituting for all other icons bar the Scatter, and helping players complete additional winning combinations.

The Scatter is represented by a special golden elephant symbol, which triggers the game’s Free Spins round, awarding players from 8 to 50 spins depending on the number of icons used to activate the feature. While the Free Spins round feature is on, wild multipliers can significantly increase the prizes, while elephant symbols will pay no matter where they land.

Playable on Both Desktop and Mobile

Like all iSoftBet games, Jumbo Stampede is also developed in HTML5, which means it offers the same level of quality on mobile and desktop.

In terms of wagering, the slot is playable from a mere $0.20 up to $20 per spin, while offering medium variance and an average return to player of 95.95%.

Commenting on the latest move, Michael Probert, Chief Commercial Officer at iSoftBet, said that after an extremely successful exclusivity period with GVC, the company was delighted to be able to offer Jumbo Stampede to the wider market.

Probert pointed out that with exciting bonus features and a thrilling game pattern that classic slot players would love, Jumbo Stampede was set to become one of iSoftBet’s best games to date.