You are at: Home News Wazdan Doubles the Fun with Two New Releases 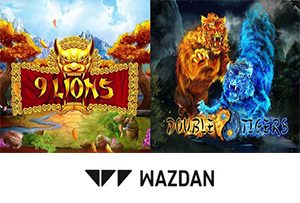 The new releases, 9 Lions and Double Tigers, were initially introduced at this year’s G2E Asia in Macau, back in May.

9 Lions even managed to win the acclaimed Hot Product Award at the show, while both operators and players around the world were eagerly looking forward to its official debut.

9 Lions draws its inspiration from the Chinese culture and features probably the two most important creatures in the mythology of the world’s most populous country – lions and dragons.

The game is set in a Zen Garden and features 9 separate reels forming a 3×3 grid, combined with a number of potentially lucrative special features: Lion Bonus, Dragon Bonus, Blocking symbols and a very special Gamble game. All of these entertaining extra features offer intriguing possibilities of exciting wins, while the luckiest among players will be able to win the game’s 5,000-coin jackpot.

Double Tigers is another Chinese-themed slot, inspired by the symbolism of yin and yang. This is a 3-reel 3-row slot with a total of 8 paylines that will take players on an epic adventure set in a remote mountain temple. Be on a lookout for tigers whose roar will unlock the bonus feature, increasing the possibility of grabbing hefty rewards.

Double Tigers is an action-packed adventure you wouldn’t want to miss.

Commenting on the arrival of the new games, Head of Sales at Wazdan Andrzej Hyla said the company had launched some fantastic new slots this year, generating a significant amount of reaction from the industry.

He stated Wazdan was absolutely focused on delivering its partners the most immersive content in the market, and added he was looking forward to working more closely with all of them, especially on game development and enhancing the player experience with Wazdan’s unique technology base.