You are at: Home History of Video Slot Machines 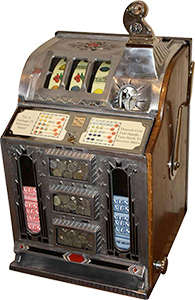 The first slot machines were very primitive, mechanical gambling machines, a lot more different than what people are used to see today. Before the invention of the electronic slot machines where you only had to push a button, slot machines were operated with a lever with which slot players had to activate the reels. Generally they had only 3 reels, and as they evolved slot manufacturers began producing 5 reel slots, which today dominate the market.

Slot machines have various names in different parts of the world. In Australia/New Zealand they’re called “pokies”, short from “poker machines” because the first slots had poker symbols on the reels; in Canada they’re called simply “the slots”; in Britain people call them “fruit machines” because of the various fruit symbols for which they are best known; and in the USA just “slot machines”. All in all, they are very much loved by all.

This was the year when the precursor of the first slot machine appeared invented by Sittman and Pitt in New York. It had five drums that acted as reels, a lever to activate them and 50 card symbols. It was widely used across bars and was called One-Armed Bandit.

This was the year when the first true slot machine was invented by Charles Fey in California. It had only 3 reels, it had much simpler mechanism, a total of just five reel symbols and could give automatic payouts. The biggest win was ten nickels. It was named Liberty Bell and had much greater success than its predecessor. Some argue that it was actually invented in 1887.

The first fruit symbols on slot reels appeared when Herbert Mills developed his own slot machine, the Operator Bell, which served as a competition to the Liberty Bell manufactured by Charles Fey. The demand was big and Fey couldn’t produce enough slots in time, but refused to sell the rights to the machine to bigger companies, so Herbert Mills tried to compete with his new invention.

Bally Manufacturing managed to develop the first electromechanical slot machine that could make a payout of 500 coins without the help of an attendant. Soon enough the lever became obsolete and the popularity of this slot, called Money Honey, helped electronic games become dominant.

The 70s saw the birth of the first true video slots in California. It was a glorious decade for slots. The machine had a display mounted on slot machine cabinet and soon enough the Nevada State Gaming Commission approved it. The technology for this video slot was developed by Fortune Coin Co, which later was bought by the famous IGT in 1978.

In 1994 the first online casino that offers online video slots appeared running on the software of the already famous software developer, Microgaming.

Perhaps this is the moment when video slots affirmed themselves as first-class casino games. Previously video slots were more of marginalized and slot players weren’t offered any perks like table game players were. Second screen bonus video slot machines helped casinos attain even larger profits than before.

In 2012 it was reported that British slot lovers spent nearly £5 billion on playing their favorite video slot, online and land-based. This figure accounts only for the profits in the United Kingdom alone.

The Future of Video Slots

We’ve come a long way since the Liberty Bell without a doubt. Today video slots are simply computers with microprocessors and fancy colors. Online video slots are even more colorful, with 3D graphics and some of the biggest jackpots known to gamblers. If only the first slot players from the 19th century could see how these games have evolved, and who knows what the future holds.