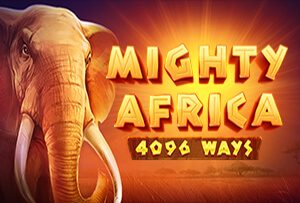 The leading game developer which supplies certified and tested, cutting-edge content worldwide Playson has announced the launch of the latest addition to its portfolio of video slot games.

Playson has started February by releasing the brand-new release titled Mighty Africa: 4096 Ways, which will be playable on a wide selection of devices, including mobile and desktop.

Players can look forward to a wild African adventure, where they’ll go on a safari while trying to grab as many wins as possible.

This is a 6-reel 4-row video slot and as its name suggests it doesn’t have traditional paylines. Instead, it offers 4,096 different ways to win. That’s why the developer used the said layout, as this solution offers the possibility to display a total of 24 spins on each spin.

As we can expect from a game themed in this manner, players will encounter a variety of African animals on the reels, including wildebeest, cheetahs, crocodiles, rhinos, and elephants. These icons will award more lucrative payouts, while the usual set of playing cards symbols are not that generous.

Free Spin Round is Particularly Lucrative

The game features the Wild symbol and has the power to substitute for all other symbols except the Scatter. Wilds can appear on all reels bar the leftmost one and can trigger the Wild Split feature during the Free Spins round. This interesting feature basically randomly splits a Wild symbol into two or event three other Wild icons.

Be on a lookout for the Scatters, as landing at least three of a kind will trigger the Free Spins round, awarding players from 8 up to 50 spins! The feature itself can be retriggered: simply land another two Scatters and additional spins will be added to your count.

While the Free Spins feature is active the game will play all ways, which in practice means the number of ways to win will be increased from 4,096 to a staggering 31,104! With a bit of luck, players will be able to win payouts worth 5,000 times the triggering bet!

Mighty Africa: 4096 Ways can be played at any Playson-powered online casino.