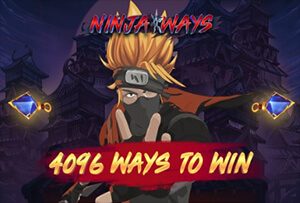 The Isle of Man-based casino game development company Red Tiger Gaming has announced the launch of its latest video slot.

Get ready for martial arts action, with fearless Ninjas jumping around the screen, while players will definitely be attracted by this thrilling game, as it offers plenty of opportunities to win big. With 4,096 different ways to win, and with maximum payouts going up to 10,000x the triggering wager, this action-packed tale has the potential to become a smashing hit among players around the globe.

It is available on both desktop and mobile, playable form a mere $0.20 per spin.

The reels are set against a traditional Japanese town, while the game icons are surrounded by columns and roof of a Dojo, and the whole theme is perfectly rounded up with a matching soundtrack.

The vibrantly coloured symbols include a range of lethal Ninja weaponry. To start getting payouts, players will have to land a minimum of 3 matching symbols on adjacent reels from left to right, while during some features change the way the payouts are awarded.

Don’t be afraid when you see a Ninja appearing on the grid, because he’ll cut through the reels with a sword, revealing 1 of 3 game features.

The Ninja Doors bring 2×2 or 3×3 symbols, the Ninja Ways will leave a trail of matching icons across the screen, while the Ninja Wild bonus randomly places Wilds on the reels. The Ninja Ways feature offers a Free Spins bonus game, which is trigger with the help of Scatters, with each of them revealing a number of spins awarded to players.
While this round is active, the Ninja Doors, Ninja Ways or Ninja Wild will be activated more frequently.