You are at: Home News It’s Time to Rock with Play’n GO’s Latest Twisted Sister Slot 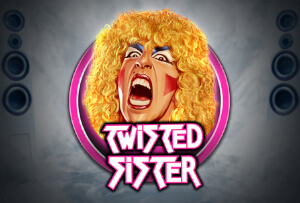 Play’n GO boasts a wide selection of music-themed video slots. Whether you’re a rock or a metal fan, you’re sure to find a title that will match your taste in music, with the list of releases including games such as Annihilator and Testament.

Let’s Get the Party Started

Led by Dee Snider, the band entered the music scene in the early 1970s and became extremely popular during the 1980s thanks to its music videos. As we’ve already gotten used to with other Play’n GO’s music-themed releases, players will be able to enjoy some of the band’s biggest hits – including “I Wanna Rock” and “ We’re Not Gonna Take It” – while playing this game.

Twisted Sister will take place on a 6-by-6 cascading reel set, with band members making their appearance on the grid as higher-paying icons. Other symbols will be represented as merchandise, while the game’s Wild symbol will be able to stand in for all of the icons found in the Main Game.

Play’n GO’s most recent launch also comes with Wild Scatters, which activate the We’re Not Gonna Take It feature whenever 4 of them are added to the Scatter collector. Once the round starts, a huge 2×2 Mega Symbol will appear on the reels, moving across the grid to reach other wild Scatters. Whenever a winning combination is formed, all winning symbols will disappear from the screen, with new ones appearing in their place.

Whenever a band member helps form a win, a meter will be charged up. Add a total of 5 charges and the meter will trigger 1 of the 5 available features – at random. All of the features on offer – including the said We’re Not Gonna Take It – can prove to be very rewarding.

Activating the Scream feature, a soundwave will destroy all low-paying symbols on the reels, with new ones cascading into their places. But that’s not all since the Go Wild feature allows players to choose a symbol that will serve as the Wild. Unite will turn all band member into a single symbol, while Dad Gets Angry brings 2 wild Scatter symbols after a non-winning spin.

Twisted Sister is waiting for you at any online casino powered by Play’n GO.