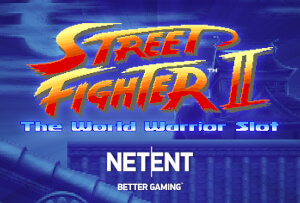 NetEnt has announced the arrival of the latest addition to its offering of high-quality video slots.

The new release is based on a popular arcade from the 1990s, which has since become a true gaming classic.

Bringing Back the Familiar Vibes

The original game, launched back in 1991, was titled Street Fighter II: The World Warrior. Developing a video slot bearing the same name represented a huge challenge for the Swedish gaming giant, as their creation needed to stay true to the original vibe of one of the most famous video games in its genre.

Expectations are always big when it comes to games developed by NetEnt, and slot aficionados from all over the world were looking forward to the exciting playing experience.

And NetEnt hasn’t let us down, creating yet another impressive release for its extensive portfolio of slot games. Even before the start of each round, players will be prompted to choose 1 of 8 familiar characters, which immediately brings back the memories of the game that revolutionized the entire genre.

Several elements originating from the original game are there, from the design of the main characters to locations and soundtrack. NetEnt promised a well-designed game, packed with an exciting feature, and Street Fighter II: The World Warrior will certainly not disappoint in any way.

Get Ready to Fight!

The game boasts distinctive gameplay, as it includes a series of battles between the character, chosen by players before the reels start spinning, and their randomly chosen opponent.

Street Fighter II: The World Warrior comes with the Cluster Pays game mechanic, while winning combinations are formed with symbols exchanging punches in the process. This shrinks the health bar situated above a character.

Each battle has two possible outcomes: either the player wins, or his opponent will be the one to emerge victorious. If you lose, the Car Smash bonus feature will be triggered, while a victory will activate the boss fight, where the luckiest ones may claim handsome prizes thanks to progressive win multipliers!

However, a round is not completed very easily, so it will take some time before you’re ready to move on. Some punters may not like this, but it will hardly represent a problem for fans of the original title from 1991.

Street Fighter II: The World Warrior is waiting for you at any online casino powered by NetEnt.