You are at: Home News King Kong Cash Returns to Action with a Progressive Jackpot 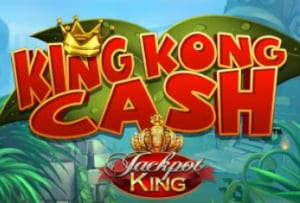 Four years after the original King King Cash game hit the market, Blueprint Gaming decided to give its popular release an overhaul.

Over the years, King Kong Cash has become one of the most popular titles in Blueprint Gaming’s portfolio, so developers opted not to keep the core game unchanged. This means the slot layout, its game mechanic and in-game feature will stay the same.

King Kong Cash comes with a standard five-reel three-row layout, with a total of 20 paylines on offer. There are five bonus features available, and all of them can be activated by landing 3 Scatter symbols.

In addition to bonus features, King Kong Cash feature 5 modifiers that can be unlocked on every spin in the Main Game. Once activated, these modifiers can add more Wilds to the grid, activate a spin streak and, and much more.

Progressive Jackpot – the Most Important Change

The biggest change, when compared to the original game, is the addition of the Jackpot King prizes, which can be claimed through the Wheel King feature. This thrilling feature can be unlocked on any spin, further adding to the overall excitement and giving punters the chance to scoop huge payouts.

Speaking about the company’s decision to include the popular game in the Jackpot King series, Jo Purvis, Director of Marketing and Relationships at Blueprint Gaming, said it had been done by the popular demand. He pointed out that both players and operators wanted more games to be included in the jackpot pool, and Blueprint Gaming was more than happy to oblige.

Blueprint Gaming is confident that adding King Kong Cash to their progressive jackpot network will turn out to be a great move, especially as more and more players will be able to enjoy this classic game.

King Kong Cash, as well as other games from the company’s extensive portfolio, can be played at any online casino powered by Blueprint Gaming.