You are at: Home News Microgaming Adds A Dark Matter to Its Lineup of Slots 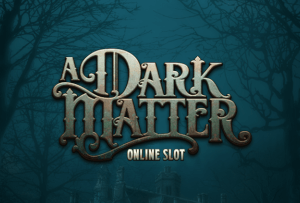 Do you have what it takes to solve a spooky mystery of the Wraith Manor. (Photo: microgaming.co.uk)

The leading producer of online slots Microgaming has announced the launch of the latest addition to its extensive offering of games.

Titled A Dark Matter, the fresh release invites players to solve a puzzling mystery after a series of unexplained events plague the peaceful English town of Stonehurst.

Solve the Mystery of the Manor

A Dark Matter has been exclusively developed for Microgaming by their partners at Slingshot Studios.

Unravel the mysteries of the spooky Wraith Manor in this high volatility slot featuring a standard five-reel three-row layout with a total o 5 bidirectional paylines, enigmatic protagonists and a number of exciting and potentially lucrative features including the Invading Wilds.

Players will join forces will Scotland Yard’s investigator Nathan Highmore and together they will try to uncover the haunting secrets of the Manor. With an eerie soundtrack playing in the background, punters will give their best to solve these puzzling mysteries and win prizes while they’re at it.

Be ready to reap the power of the Invading Wilds feature, triggered whenever they land on reels 2 or 4. At the same time, they will spread to adjacent reels to form a huge block consisting of 6 Wild symbols.

Stacked Wils can combine, creating a block of 9 Wild symbols with a huge win potential.

Land 3 Scatter symbols to unlock the game’s Free Spin round. Players will gain entrance to the Manor, with 12 spins waiting for them there. Each additional Scatter landing while the feature is active will add 1 extra spin to the count. The Invading Wilds add to the excitement as they will introduce a 2x multiplier.

A Dark Matter awaits at any of Microgaming online casinos.

Commenting on the launch of this game, James Buchanan Director of Global Operations at Microgaming said Slingshot Studios had successfully created a high volatility slot experience with an engaging storyline, intricate artwork, and atmospheric sounds.

Buchanan went on to say that the addition of Invading Wilds and bidirectional paylines offered an exciting and rewarding gameplay experience, with win potential of up to 2,400x the player’s bet during free spins.

Richard Vermaak Head of Studio at Slingshot Studios pointed out they were very excited about A Dark Matter’s release, as the entire team had invested a lot in crafting a rich world for players to enjoy.