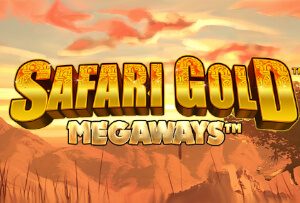 Blueprint Gaming has announced the launch of its newest video slot, an exciting release that will be taking players to a thrilling African adventure. Titled Safari Gold Megaways, the most recent addition to the developer’s lineup boasts includes such features as cascading reels, multipliers, a bonus wheels and a Free Spins round.

As the name suggests, the new game uses the popular Megaways game mechanics, which significantly boosts players’ chances of scooping big prizes as it offers up to 117,649 different ways to win!

Majestic Animals on the Reels

The reels are populated with symbols matching the whole theme. In addition to a usual set of playing card suits, the list of low-paying symbols includes various African animals such as elephants, leopards, buffalo and lions.

Match symbols on adjacent reels to start receiving payouts, with the number of symbols on a single reel going up to 7 – thanks to the Megaways system.

The sun serves as the Wild symbol, setting on a horizontal reel located above the main reel set.

This is the first title launched by Blueprint Gaming to feature a Bonus Wheel. The feature is available through the optional Bonus Bet, allowing punters to win extra prizes from the free games.

Mystery symbols can also bring lucrative prizes. They can make their appearance during any of the spins, helping players create high-paying winning combinations, with reel cascades offering the possibility to grab consecutive wins.

A Valuable Addition to the Offering

Safari Gold Megaways is playable on both desktop and mobile, with wagering starting as low as $0.20 and going up to $10 per spin. The game boasts a medium to high volatility and an average Return to Player of 96.5%

Commenting on the launch of the new game, Jo Purvis, Director of Marketing and Relationships at Blueprint Gaming, said Megaways had added a new dimension to the slot experience and pointed out the company’s newly-developed bonus wheel that features the mechanic was set to take the user journey to the next level.

Purvis added the visually stunning slot with its wild theme was set to grab the attention of players while spinning the wheel added a new twist to a popular feature.

Play the game at any Blueprint Gaming online casino.