You are at: Home News Metalheads Will Love Play’n GO’s Latest Release 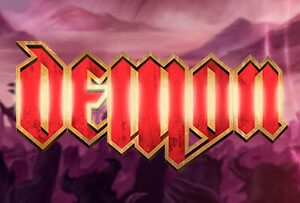 Play’n GO has announced the launch of the latest addition to its portfolio, a music-themed slot that draws its inspiration from one of the cult British heavy metal bands from the 1970s. Still active today, this band is called Demon, and its music influenced many other giants of this genre including Def Leppard and Iron Maiden.

The renowned developer of online casino content launched a similarly themed slot last year when the House of Doom hit the market.

Demon offers an interface consisting of five reel and three rows, with the design of symbols incorporating the band’s album covers, and other elements from their past LPs, while the band’s singer Dave Hill also makes his appearance. A minimum of 3 same symbols on a payline is needed to start getting payouts, with a total of 30 paylines available.

There are two substituting symbols in play. The first one is the Wild Mask, familiar to the band’s fans. This symbol can land only on the middle reel but can combine with the Dave Hill symbol, which will then act as a Wild for a spin.

The second substituting symbol is the Wild Amulet, found only on reels 1 or 5. If it lands on both of them and paired with the Wild mask, it will trigger the One Helluva Night Free Spin round. Players can grab up to 11 spins, depending on the position of the mask, while a randomly chosen multiplier can help punters scoop huge prizes.

Be Sure to Give It a Go

Wild Amulets can trigger the Depths of Hell Nested Fre Spins, where a number of perks offer punters the help to win big. While they play, players can use the jukebox feature and enjoy some of the band’s most famous songs.

Commenting on the launch, Play’n GO COO Maring Zettergren said Demon was another great release for the company as they moved into the final stretch of this year, ensuring that they finished the year with the consistency and strength shown across 2019.

He pointed out the developers really captured the spirit of the band when creating the game, giving it that something extra.