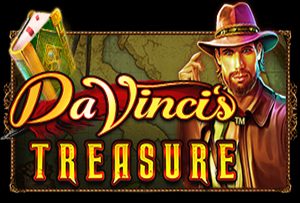 Pragmatic Play has announced the latest addition to its line-up of video slot games, a thrilling adventure that will see players hunt hidden riches.

Titled Da Vinci’s Treasure, this fresh and exciting release will par you with fearless explorer John Hunter take you on a thrilling quest to find immense treasures, while punters are sure to benefit from such features as the Free Spin game, a pick-me round and a special Map Quest.

Get Ready for an Adventure

This is a five-reel three-row video slot with 243 different ways to win. The reels, which are set against a map, are populated by symbols which include a crossbow, book and the brave explorer himself. John Hunter is also the game’s highest paying symbol, awarding a payout worth 25 times the triggering wager when he lands across all five reels.

Leonardo Da Vinci serves as the Wild icon, substituting for all other symbols, bar the Scatter. The Scatter is represented by the Codex, a puzzle device that activates the game’s bonus rounds.

Land at least three Codex symbols to unlock one of 3 bonus rounds, which you’ll be randomly awarded. You could be given a task to select one of the many famous painting, with instant multipliers available if you’re lucky enough, or you could activate the Free Spins game, and receive 12 spins.

During each of the spins, your win multiplier will increase by 1x. The best part is you can retrigger the feature and win up to 60 spins, which means you’ll have a staggering 60x multiplier active on the final spin!

The Map Quest feature will see you spin a wheel to move around a treasure map, picking up rewards along the way. Go all the way to the last section to collect a fantastic prize worth 100 times your wager.

Commenting on the launch of this game, Melissa Summerfield, Chief Commercial Officer at Pragmatic Play, said the company was delighted to unveil its latest show-stopping slot, Da Vinci’s Treasure, and pointed out the slot’s immersive storyline and thrilling bonus features would make it one of the developer’s “most jam-packed games yet”.

Da Vinci’s Treasure is available across all platforms and can be played at any of Pragmatic Play-powered online casinos.