You are at: Home News Dig for Gold in Betsoft Gaming’s New Western-Themed Game 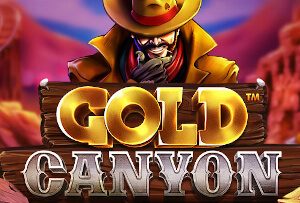 Betsoft Gaming has announced the launch of the company’s newest addition to its extensive offering of video slots.

Players can look forward to a Western-themed game offering dynamic gaming experience and filled with exciting features such as the Free Spins, expanding Wilds, and a special dynamite Bonus round.

Titled Gold Canyon, the developer’s fresh release is optimized for online and mobile, featuring a 5-reel 3-row layout with 20 paylines.

Set against desert mountains guarding the entrance a mine, the reels are populated with a wide variety of beautifully-designed symbols, whose list includes playing card symbols, lucky horseshoes, sheriff badges, and lamps, while the game’s highest-paying symbols featuring a horse or shinny gold nuggets.

In the mine, players will encounter two shady-looking prospectors looking for gold. One of them serves as the game’s Wild symbol, substituting for other icons and helping players complete additional winning combinations, while the other one is the Scatter, activating the Frontier Free Spins bonus round when appearing on the reels.

Be on a lookout for the dynamite symbol, as three or more landing on the grid will trigger an explosion, leaving empty spaces on the reels. Brand-new symbols will drop down on these empty places, which can lead to new winning combos being formed.

Gold Canyon also has a gamble feature, giving players the chance to double their prizes or lose it. This exciting and potentially lucrative feature even allows punters to repeat their successful gambles!

The new title arrives in the market only a couple of weeks after Betsoft Gaming scooped the Innovation in RNG Casino prize at this year’s ERG B2B awards.

Commenting on the launch of the new game, Annamaria Anastasi, Marketing Director at Betsoft Gaming, said Gold Canyon was a classic slot, packed full of unique Betsoft features, bonus rounds and free spins that players were sure to love and keep coming back to.

She pointed out the release came just a few weeks after their “Innovation in RNG Casino” award at the EGR B2B gala evening and added they were really excited for what the rest of 2019 had in store with even more fantastic titles to come!

Play the new game at any of Betsoft-powered online casinos.