You are at: Home News Ancient Chinese Legend Coming to Life in the New Monkey Warrior Slot 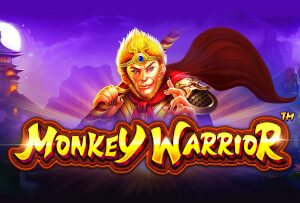 The new game is titled Monkey Warrior and boasts stunning visuals, 243 different ways to win, and several thrilling and potentially lucrative features, such as Wild, Respins, and Free Spins. However, the centre stage has been taken by four cash prizes that can be grabbed in the Money Respin feature.

Monkey Warrior draws its inspiration from a Chinese novel titled Journey to the West. Originating from the 16th century, this novel follows adventures of Sun Wukong, a monkey warrior of magic power and immense strength,

That’s why the reels are set against a beautiful and mystical garden, with a soundtrack that perfectly matches the game’s theme.

According to information provided by Pragmatic Play, Monkey Warrior is playable from a mere $0.25, while the wager can’t exceed $125 per spin. The slot has an average return to player (RTP) of 96.5% and it can be played on both desktop and mobile.

The reels are populated with a wide variety of symbols, with the holy monk being the highest-paying one. Landing all five across the payline will award a payout worth 20 times the triggering bet. The icons players will want to see more often are the Monkey Warrior Wild, the upside-down peach and the Scatter symbol.

6 peach symbols landing on the reels at the same time will activate the Money Respin feature, awarding a total of 5 respins. During the feature, the reels will be populated only with peaches, with each of them having its only value or Mini, Minor or Grand Jackpot. With a bit of luck, players can win prizes ranging from 30 to 200 times the wager.

Fill all 15 positions to receive a neat 2x multiplier.

3 Bonus symbols landing on the three middle reels unlock the Free Spins round, initially awarding a batch of 8 spins which can be retriggered without any limit. The maximum win is worth 6,080 times the wager.

She pointed out that with its smooth gameplay and incredibly detailed setting, they were looking forward to their fans getting a chance to join Wu Kong on his journey exciting journey.

Visit any of Pragmatic Play-powered online casino and give it a go.