You are at: Home News Blueprint Gaming Launches Its First Game in 2020 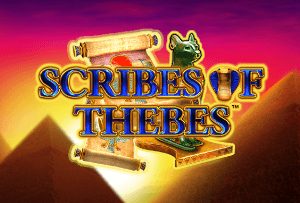 The leading developer of online casino games Blueprint Gaming has recently expanded its portfolio with an exciting Egyptian-themed release.

Titled Scribes of Thebes, this exciting new addition to the company’s offering promises to take players on an epic adventure set in a mysterious world of Ancient Egypt.

Featuring a standard five-reel three-row layout, the game comes with a total of 25 active lines. The action-packed slot represents an upgraded version of the game launched by developers at Gauselmann Group company, a member of Real Time Gaming (RTG).

After the overhaul done by Blueprint Gaming, this release now boasts a plethora of immersive and potentially lucrative features that are sure to further add to the excitement.

When it comes to features on offer, players will be given lots of chances to scoop handsome cash prizes. One of the best ways to do so is through the game’s Free Spins bonus round. Simply land at least 3 Scatter symbols anywhere on the reels and you’ll unlock the feature, receiving 10 spins in the process.

There are other ways to get payouts as well. While the Free Spins feature is active, a random expanding symbol will make its appearance on the reels.

An interesting and distinctive part of this game is the Double Book mode. Using this functionality, players will be able not only to increase the size of their wagers but also to claim maximum prizes the game has on offer. Once activated, the Double Book model will bring 2 special symbols in play, as well as 15 bonus games.

This is the first game launched by Blueprint Gaming this year. Combining classic and modern slot elements, the gaming company has successfully created a dynamic online casino game that will appeal to a wide audience of players.

Developed in collaboration with RTG, we can hope that Scribes of Thebes will be popular as Eye of Horus and Fishin’ Frenzy, the other two slots developed by the two renowned developers.

Scribes of Thebes can be played at any online casino powered by Blueprint Gaming.