You are at: Home News Solomon the King Arrives at Red Rake Gaming Casinos 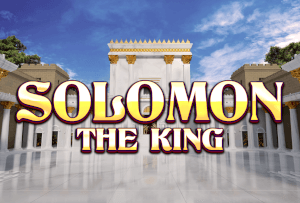 Red Rake Gaming has recently announced the launch of its latest release, which is sure to become a valuable addition to the company’s portfolio.

Titled Solomon the King, this fresh launch is an action-packed slot filled with plenty of entertaining as well as potentially lucrative features.

An Adventure of Biblical Proportions

Boasting an unusual six-reel ten-row layout, Solomon the King comes with a wide variety of mini-games to further boost the overall gaming experience. The list of these mini-games includes the Solomon Mini Game and the Solomon Mini-Game Accumulator, while players will benefit from such features as the Free Spins bonus round, where their winnings can be further increased thanks to multipliers.

We should point out that instead of traditional paylines, Solomon the King offers a staggering 1 million different ways to win, while the maximum available payout is worth 20,000 the bet! Mini-games can also lead to rewarding prizes, with the biggest one going up to 7,500 times the stake. At the same time, the Free Spins round has the potential to grant staggering payouts, which are further boosted by the Justice Multipliers.

Drawing its inspiration from biblical times, the game features an excellent soundtrack, but it’s the towering stacked reels format that players are going to love. The reels are populated with unusual icons, which are unique to this game. The Auto Play functionality is also available, allowing players to set the number of automatically played spins, just sit back and relax.

When it comes to symbols that appear on the reels, the usual set of Royals are low-paying ones, while King Solomon, the Star of David golden ring, the Ark and the Bible award much bigger payouts.

Players can benefit from the use of the cascading reels, as symbols forming a winning combination will be removed from the grid, with new ones falling into their place. If they manage to form new wins, the entire process will repeat, enabling those with enough luck to create multiple winning combinations within a single spin.

Solomon the King can be played at any online casino powered by Red Rake Gaming.