You are at: Home Spinmatic Plata o Plomo
back to all games
Plata o Plomo Slots Game
Game Details 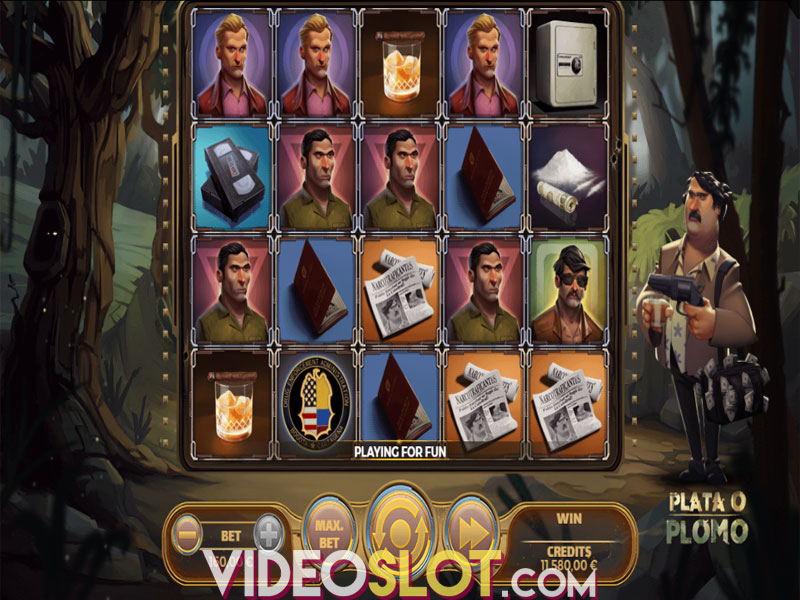 A drug-trafficking themed game is brought to us by Spinmatic in Plata o Plomo, an online slot launched in October 2018. The game offers Wild Substitutions, Moving Wild Respins and Plata o Plomo Bonus Game. Meticulous visuals with sharp animations and a suspenseful soundtrack certainly add to an already satisfying gaming experience. The RTP of 95.40% is however slightly lower than the average.

The 5-reel, 4-row grid provides 40 paylines, on which punters can wager between $0.40 and $160.00. In order to receive payouts you must obtain 3 or more matching icons on consecutive payline positions, beginning from the leftmost reel to right. Entering the bet settings allows players to adjust coin value, ranging from $0.01 to $1.00 and select from 1 to 4 coins to stake per line. Start the game round by pressing Spin or activating Autoplay so that the reels whirl without interruption. Tapping the MaxBet button plays the game with the highest wager available.

There’s an abundance of theme-related symbols occupying the reels. A Passport, Bullets, Bag heavily loaded with money and Newspapers stand for symbols with lower payouts delivering 60 coins each for combinations of 5 identical ones. Medium-win symbols depicted with Tapes, Badge, Vault, Whiskey and Cocaine, award from 75 to 200 coins for 5 of a kind. High-value icons are represented with three police officers issuing 750 coins each when five matching ones hit a payline. Wild is depicted with Pablo, a drug dealer that lands merely on the first reel. It not only replaces all symbols, but also grants a Respin by moving to the next reel.

Once Wild hits the first reel, it will trigger Respins and start shifting to the right. Should Pablo face someone from the police, the Bonus is activated. Opportunities to bag up some really massive sums await you in this Bonus Game. Help Pablo escape either by choosing Money so that an officer is bribed or by selecting Bullets which will enable Pablo to shoot the policeman. If the officer receives the bribe, Pablo will move on to the next round. If he declines, Pablo will die. Should our villain manage to survive all three encounters, you will walk away with 100,000 coins.

Wager carefully, as this is a highly volatile slot and you must keep playing long enough so that prizes are worthwhile. The gameplay doesn’t offer much feature-wise but the potential of scooping up to 120,000 coins is not to be neglected. Find Plata o Plomo and try it on desktop or on any portable device, mobile, tablet or laptop.