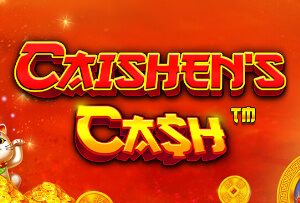 The leading online casino games developer Pragmatic Play has added yet another video slot to its portfolio of HTML5 games.

Titled Caishen’s Cash, this fresh release is a Chinese-themed game with a standard 5-reel 3-row layout.

On the reels, players will encounter symbols from Chinese folklore, with plenty of coins stacked on the game’s background. Adding and immersive feel to the newly-launched game is a soundtrack that perfectly matches the whole theme.

Once the game bonus round is activated, players will be free to choose between the Money Respin round or the Free Spins game.

The Money Respin feature will see a variety of differently-coloured coins find their place on the reels, significantly improving players’ winnings.

Caishen’s Cash also features the Jackpot Bonus game. Here players will need to pick three matching coins in order to grab a jackpot. There are four of them available, while their hunt for the riches will be overseen by the Gold of Wealth himself.

Commenting on the launch of the new game, Melissa Summerfield, Chief Commercial Officer at Pragmatic Play said Caishen’s Cash was the company’s another feature-filled hit

She also said that with gold coins filling the reels, the Chinese God of Wealth offered both excitement and the potential for big prizes.

Summerfield pointed out that with its immersive gameplay and engaging bonus modes, Caishen’s Cash was sure to be a popular title with all of their players.

The arrival of Caishen’s Cash comes shortly after the launch of the Dog House slot and represents a part of the company’s ambitious strategy which includes releasing three new titles on a monthly basis.

According to available information, we can look forward to more frequent releases as the year comes to an end.

It should be noted that Pragmatic Play’s games are available in a wide variety of currencies and languages, and can be accessed by operator partners through a single API along with bingo, scratchcards and live casino games.