You are at: Home NeoGames Mighty Sphinx
back to all games
Mighty Sphinx Slots Game
Game Details 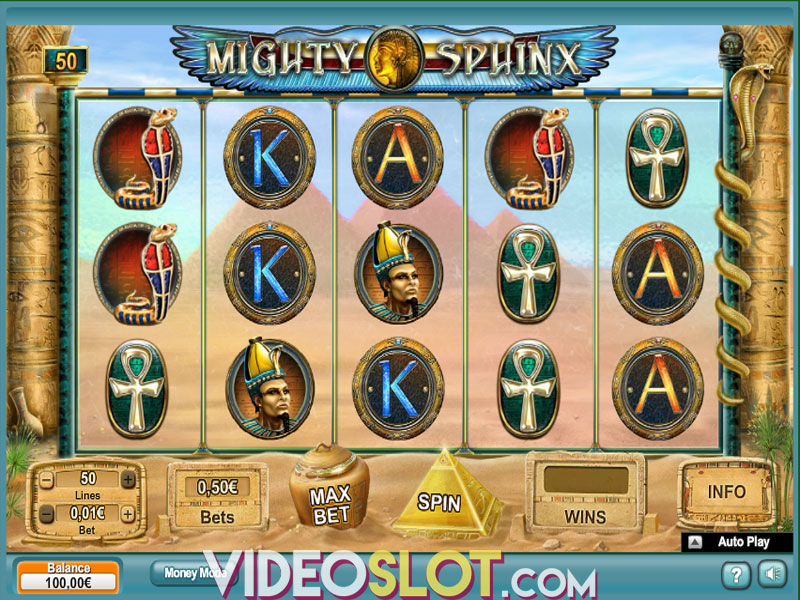 An international software provider NeoGames launched Mighty Sphinx online slot in June 2013. Over time, it proved to be their top-played game. Though the design, animations and the soundtrack are of basic quality, the features provide rewarding prizes, so punters keep coming back for more. If you decide to try this slot out, you’ll benefit from Wild Substitutions, Scatter Pays, two Bonus Games and a Free Spins Round. The RTP stands at 93.02%, which is, we must admit, quite below the average.

The traditional 5-reel, 3-row game set offers 50 paylines that can be adjusted. This means that players can select the number of active paylies on which they wish to place bets spanning from as low as $0.01 and up to $250.00. Payouts are delivered when 3 of a kind appear on adjacent positions starting from the leftmost reel on a winline. When the game loads, you also need to adjust the coin size on a scale from $0.01 to $5.00. Click on the Spin button or start Autoplay so that the reels whirl automatically.

High-value symbols include a Cobra, Sarcophagus, Pharaoh and an Empress that award between 80 and 500 coins when 5 identical ones hit a winline. Low-paying icons are represented with Playing card symbols King and Ace, as well as with the Eye of Horus and an Ankh delivering 50 and 80 coins for 5 of a kind. Wild is depicted with a Crystal Sphere that steps in to substitute all icons except Scatter and Bonus to complete wins. Furthermore, prizes from 10 to 4,000 coins are issued when between 2 and 5 Wilds land. Scatter rewards gamblers with payouts of 1x, 5x, 50x and 200x the bet respectively when 2, 3, 4 or 5 appear.

Another special symbol, depicted with an ancient Temple appears on reels 2, 3 and 4 during base game. Should three Bonus icons hit one active payline the Bonus Game begins, whereas, these 3 symbols hitting two winlines activate the Double Bonus Game in which all wins are doubled. In the Bonus Game, you get to choose stones that grant cash wins, a Level advance or a strike. Landing a minimum of 3 Scatters anywhere on the layout will reward you with 10 freebies. What’s more, as spins continue, the Multiplier grows up to the value of 10x.Finally, but not to be neglected, the number of Wilds and Scatters appearing during this Feature is greater than during main game.

Mighty Sphinx video slot provides a gripping playing experience, and what’s even better, you can play it whenever and wherever you want. Just pick a device that best suits you, desktop, or some hand-held gadget.