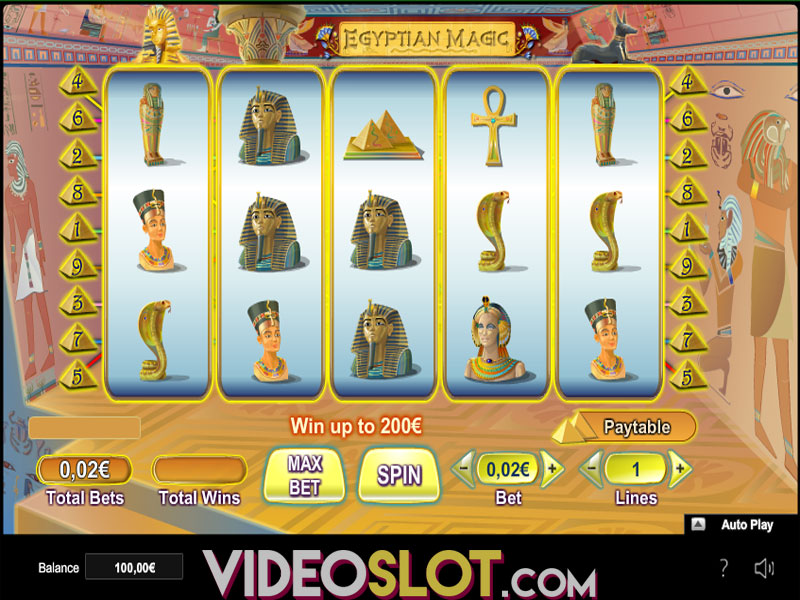 NeoGames software provider launched Egyptian Magic online slot in February 2012, adding a cryptic Egyptian-themed title to their catalogue. The design, animations and the audio are basic yet beautiful and satisfactory. However, symbols that deliver rewarding payouts make up for the lack of stunning visuals. Prizes of up to 100,000 coins will arrive thanks to Wild Substitutions and Scatter Pays. The RTP for this game is set at a somewhat lower value of 93.5%.

The traditional 5-reel, 3-row grid offers merely 9 adjustable paylines, and one receives payouts when 2 or more matching symbols appear on consecutive winline positions starting from the left to right. Wagers start off from as low as $0.02 and go up to $90.00. To get to total bet values, you should choose the number of active paylines and select the size of your line bet ranging $0.02 to $10.00. Tap Spin or MaxBet to begin playing or initiate Autoplay so that the game continues automatically.

High-value symbols include the Sphinx, a Cobra, a Sarcophagus, as well as a Scarab, the Eye of Horus and Pyramyds that reward players with prizes spanning from 5,000 to 10,000 coins for 5 of a kind. Low-paying symbols are represented with a Golden Tablet, Cleopatra, a Cat and an Ankh delivering 1,000, 2,000, 3,000 and 4,000 coins respectively when 5 hit an active payline. Pharaoh Tut represents Wild which steps in to replace any icon except Scatter when contributing to wins. What’s more, Wild doubles each win it completes. An Egyptian deity stands for Scatter that awards payouts of 2x, 4x, 16x and 32x the bet when 2, 3, 4 or 5 appear.

As said, Wild will increase your prizes not only by substituting other symbols, but also by doubling every winning combination it takes part in. Furthermore, Scatter can land on any reel to deliver handsome sums, going from 2x up to 32x the wager. Unfortunately, Scatter doesn’t trigger the Free Spins Round, which we found rather disappointing. The win potential would have been much greater if there were freebies we’re all so fond of.

Egyptian Magic video slot does offer an as simple as it gets playing experience, but this only means you won’t be facing any complicated features while earning massive sums. Once you choose the device on which you want to play, desktop, mobile or tablet, you can lean back and enjoy.