You are at: Home Ainsworth Safari Spirit
back to all games
Safari Spirit Slots Game
Game Details 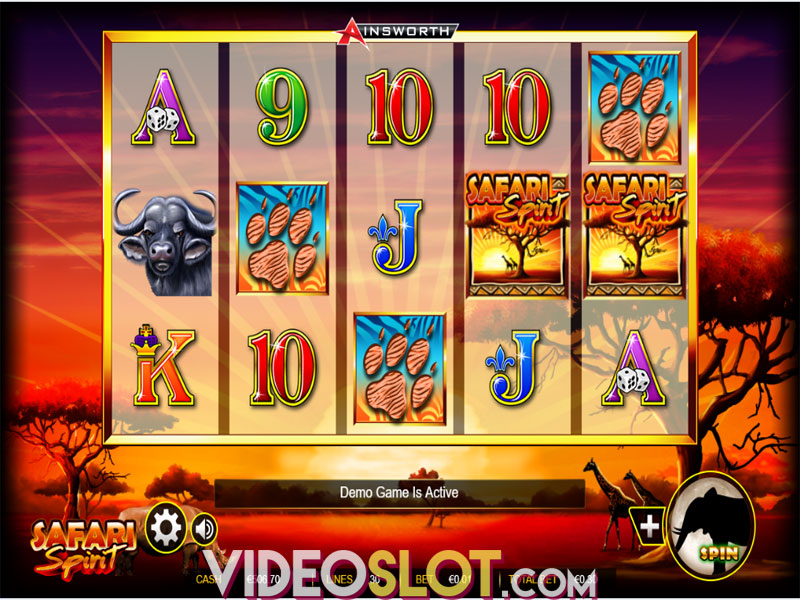 The savannahs of Africa have produced some rather unique wildlife. While most people are familiar with farm animals and those who live in forests, the blistering heat and wide open plains created tall grasslands with few trees – and life adapted accordingly in this region, giving us agile, fast animals that can traverse the terrain – or massive, powerful herbivores that can fight back against dangerous predators. You may not want to get up close and personal in real life, but you can freely gawk at them in Safari Spirit, while enjoying a medium volatility slot with a 100x jackpot, as well as a free spins bonus with a multiplier attached.

This title actually became five years old back in May of this year, and yet, the graphics still hold up magnificently. The elephant, lion, cheetah, wildebeest and giraffe all look gorgeous for their age, and the other unique icons, that being the landscape picture and the pawprint, also look rather nice. The playing card symbols such as 9, 10, J, Q, K and A don’t have any sort of work put into them to make them fit into the theme, which is a shame. What betrays this title’s age is actually the animations – small things like how the elephant raises his trunk, or the choppy movement of the rhino whose chased after by tourists wanting to take pictures. These looked awesome back in the day, but now that we’ve been spoiled, it’s hard to go back. Much like other Ainsworth titles, the real draw of things is in the special features the title offers to players – or, in the case of Safari Spirit, the single bonus that does exist.

That lucky bonus is the free spins one. Collecting three, four or five Scatters will reward you with eight, twelve or twenty free spins respectively. It is possible to win additional extra turns by collecting three or more Scatters while the bonus is already active. The free spins come with a bonus – any wins that also include the paw are multiplied by x2. Again, we have to remember this is a title from 2013 – if you’re used to how things are done nowadays, this one feature seems really small – but it pays a lot better than modern features, so we won’t be complaining anytime soon.

When you put everything together, Ainsworth’s release is a pretty cool title, with a few issues. Our major concern is the slightly below average RTP of 94.32%. The visuals were alright, though we’re not major fans of animal focused slots, and the animations are somewhat dated five years later. The gameplay may not appeal to people who don’t enjoy chasing after bonuses, and the fact there’s only one can be a bit of a downer if you were hoping for something a bit more to sink your teeth into. Our overall impressions are positive, but there’s no denying it’s showing its age in several areas – if you’re looking to play it again, or see what all the fuss was about though, we warmly recommend doing so.