You are at: Home Ainsworth Eagle Bucks
back to all games
Eagle Bucks Slots Game
Game Details 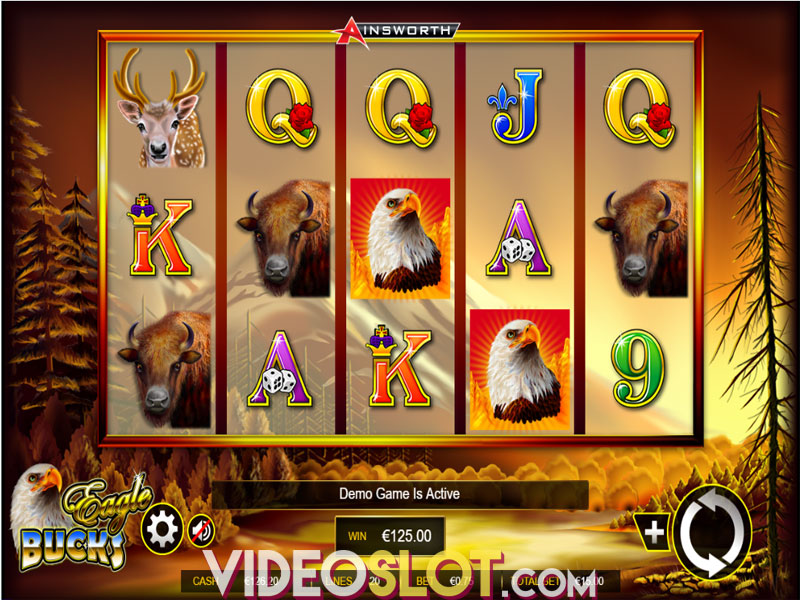 One of the biggest things that baffles both Europeans and Americans is the size of the country. Americans visiting Europe can’t get over how small it is, and vice versa, Europeans used to just driving from Germany to France in a few hours are in for a rude awakening if they try to do the same going from east coast to west coast. There’s plenty of cities along the way, but for the most part, there’s wild, untamed wilderness, and that’s what Eagle Bucks is all about. With its medium volatility and a jackpot worth 100x the wager, it’s tempting as it is, but the promise of two different free spins variants makes it a must try.

It seems to be a tradition by now that any slot involving animals will feature at least one that makes us deeply uncomfortable at some level. And while we wish we could say this Ainsworth title is an exception, it sadly is not. While it has cool looking animal symbols like the eagle, deer and buffalo, the wolf looks like it’s about to come out of the screen and swallow our soul like some kind of cheesy horror flick. On top of these icons you also have a stone arch and golden eggs as far as unique artwork goes, and then you have playing card symbols – 9, 10, J, Q, K and A, which rather obviously clash with the theme. As far as gameplay goes, Eagle Bucks handles itself best when you have free spins to work with. The feature has two variants, which means that not all extra turns are equal, too, but even the regular version will usually be pretty good for your wallet.

There are two free spins variants, both randomly assigned when three or more shield Scatters appear on the playing field at the same time. The first variant simply rewards ten free spins, with the Wild appearing on the second, third and fourth reel. The other option is to win ten free spins with the fifth reel locked with an eagle. The second variant, on top of having a locked Wild fifth reel for its duration, also expands any Wilds on the second, third or fourth reel to cover it entirely with Wilds if a single Wild lands on those reels. It is possible to win additional free spins by collecting three or more Scatters again while the bonus is active.

So where do we stand in the end with Eagle Bucks? It’s a bit difficult to pin down our feelings. We can’t say we were moved by the graphics one way or the other – they’re alright, but they’re also visibly from 2014. They were great for their time, but they just seem a little outdated nowadays. The title’s gameplay is very focused on its special features, so if that doesn’t appeal to you, you may not enjoy Eagle Bucks. The 94.09% RTP is also somewhat on the low side for our liking. In the end, we’d place this game as good enough, though there’s still plenty of awesome titles we’d rather play instead.