You are at: Home Ainsworth Mighty Wilds
back to all games
Mighty Wilds Slots Game
Game Details 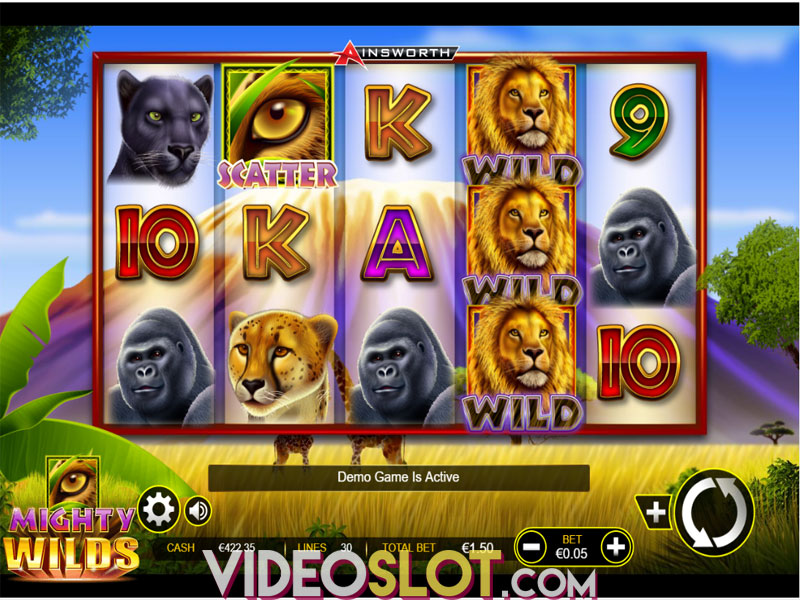 You know, we always wanted to visit Kilimanjaro. Our office is split into two tribes – people who enjoy climbing high mountains and hanging out with their friends, and outcast savages who would rather sit at home and do boring safe activities like watch sports on TV. We trust you, dear reader, will agree with the right side on this issue, because under the shadow of this large mountain, Ainsworth set Mighty Wilds, a title that offers gamblers a medium volatility title and a whopping 250x jackpot, and as if that wasn’t enough, you also have a beefy special feature to look forwards to chasing and activating.

Unlike the other Ainsworth titles we’re reviewed recently, this one was released in 2017, and the advanced graphics really show. For one, none of the animals look like soulless creatures from hell that hit the uncanny valley territory. Instead, they all seem to have a bit of their own personality while looking gorgeous in HD. You’ll find lions, leopards, panthers, cheetahs, hippos and gorillas all lounging about the reels, joined by less glamorous playing card symbols which, again, offer no paintjob to at least make them seemingly fit into the whole arrangement. While we understand these icons are simply there as filler, the artists in Ainsworth could have at least touched them up a little, as it looks really lazy as it stands right now. On the gameplay side of things, like most of their other titles, the real catch lies with the special feature it offers, although it’s a touch more complex than their usual fare, though nothing that’ll cause you much trouble, don’t worry.

First off, after collecting three or more Scatters, you are awarded ten free spins. The lion Wild now also appears on the second reel, instead of just on the third, fourth and fifth one. All symbols during free spins lose a chunk of their value, but to make up for it, the leopard, cheetah and panther symbols can now group together to reward a win. The thing is, now they can only appear on the first, third and fifth reel – and, as such, can only be collected if a Wild appears on the second and fourth reel. Just to reinforce this further, the developers made it so when a Wild appears on the second or fourth reel, the Wild expands to cover it entirely. And with all of this happening, you also have a sixth reel, where you can draw a x2, x3 or x5 multiplier to be applied for every single spin while the free spins are active.

While it’s clear the visuals have increased dramatically and there was plenty of effort put into making the gameplay more interesting, we can’t help but feel like Ainsworth may have been a bit too ambitious here. The feature feels a bit too crowded as it is right now – maybe adding the sixth reel and multiplier outside of the bonus could have been better – it would have avoided having to lower the pays for the duration of free spins, which feels like its negating the advantage the bonus should give you.