You are at: Home Relax Gaming Snake Arena
back to all games
Snake Arena Slots Game
Game Details 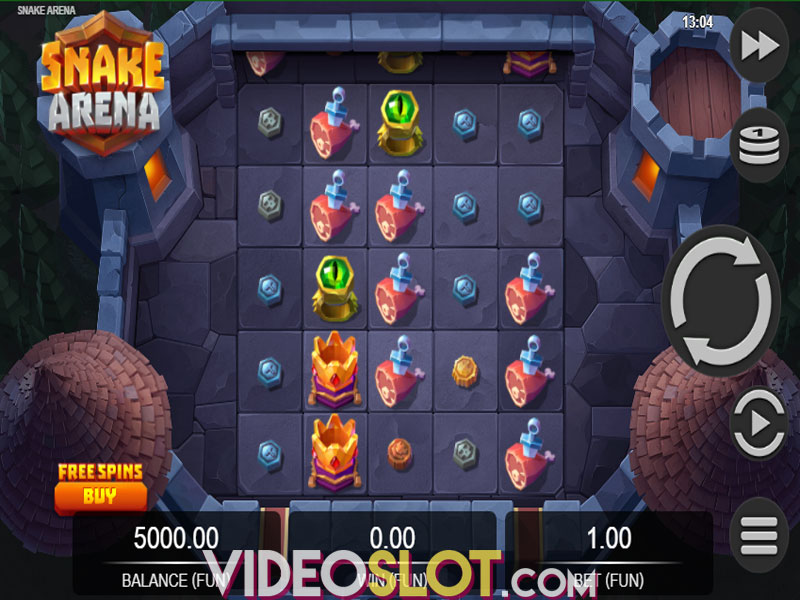 Released by Relax Gaming in January 2019, Snake Arena is fun online slot inspired with a very old video game called The Snake. This slot is done with colorful visuals and a dramatic musical score. You can expect to benefit from two Wild Substitutions, a Wild Chase Feature and a Free Spins Game. The RTP of 96.25% is quite satisfying.

A 5-reel, 5-row layout is configured to 30 paylines set within a stone-clad castle. Whenever a minimum of 3 matching symbols lands on successive payline positions from left to right they will deliver payouts. Set wager values on a scale from $0.10 to $100.00 and press Spin to start the game. Enabling Autoplay will have the reels spinning up to 1000 times without your interference.

A Crown and an emerald Gem are top paying symbols which issue 20x and 10x your stake respectively for combos of 5 matching ones. A Beer Mug and a Ham award medium-value payouts of 4x and 5x your wager when 5 appear on a winline. Four Coins stand for low-win icons that deliver 2x the stake each for 5 of a kind. There are two Wilds in this game, a Knight and a Snake. A Knight Wild substitutes for all other symbols except Scatter. As far as the Snake Wild goes, it will replace other icons even when landing partially.

The main game stores a randomly activated Wild Chase Feature that causes from 1 to 5 reels to turn Wild. It takes for the Snake Wild to land on the 1st reel simultaneously with the Knight Wild on any reel so that Free Spins begin. Throughout this Round Knight Wild is guaranteed to appear on every spin. Prior to a spin, the Snake will start chasing the Knight. If it gets to him, it will devour him so that it can grow and reward you with the next spin. Should the Snake hit its own body the feature finishes. The Free Spins will also end if the Snake manages to cover all reels from the 2nd to the 5th and players will receive a cash prize of 1,000x the bet. If you get tired of waiting for the Bonus, you can purchase it for a set price at any point during main game.

The base game is fast-paced due to the Wild Chase feature that can prove rewarding enough. Bear in mind that this is a highly volatile game that won’t allow for the Bonus to be triggered as often as one would desire. However, the maximum prize of 275,800 coins is alluring, so it’s worth waiting for it to come. If you decide to try Snake Arena, you can play it on any device, mobile, tablet, laptop or desktop.