You are at: Home Red Rake Gaming Wildcano
back to all games
Wildcano Slots Game
Game Details 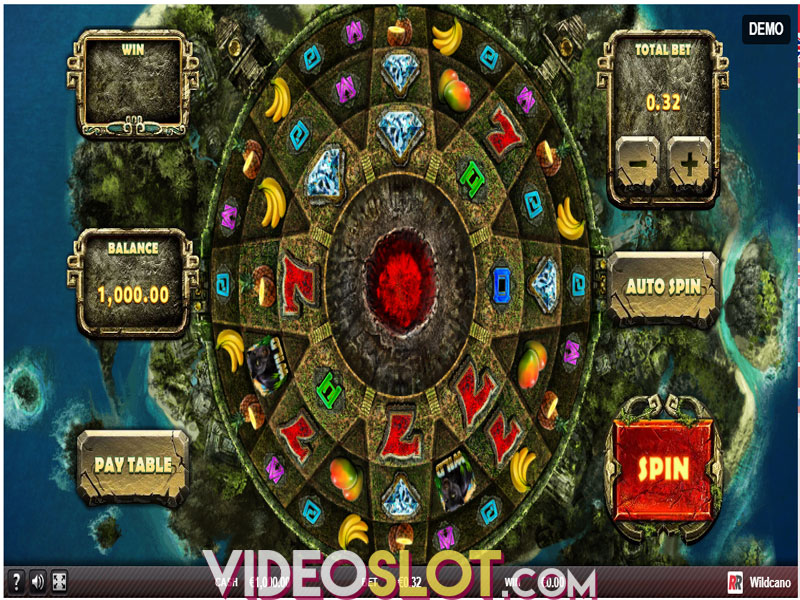 A creative team at Red Rake Gaming decided to bring something new on the market, so they designed a video slot named Wildcano featuring circular reels, first of its kind. Surrounding a volcano ready to spew out hot lava are the orbital reels with 12 paylines that offer chances to scoop up massive sums. Visually stunning, with excellent animations and a tribal soundtrack, Wildcano additionally draws attention with an abundance of features in which you can benefit from Respins, Guaranteed wins, eruptions of Wilds and a Free Spins Bonus game with payouts going as high as 240,000 coins.

The game has 3 circular reels with 12 paylines to wager bets spanning from merely $0.08 up to $200.00. 8 of the paylines are radially arranged around the volcano and up to 3 symbols can appear on them, while 4 winlines spread vertically, horizontally and diagonally supporting combinations of 6 icons. So, players receive payouts when either 3 or 6 symbols appear on a winline. Once you’ve selected your bet, start the game by pressing Spin, or initiate Autospin with up to 100 automatic rounds.

High-win symbols include Diamonds and red Sevens awarding 60x and 45x the bet for 6 of a kind. Medium-value Mangos pay out 20x the wager while Pineapple and Banana icons deliver 15x your bet when 6 matching symbols hit a payline. Various ancient symbols represent low-pay icons awarding 5x and 10x the bet if 6 appear on a winline. However, these 6-of-a-kind combinations occur rarely. On the other hand, 3-of-a-kind combos hit the reels more often but, unfortunately, award significantly lower payouts, ranging from merely 0,25x up to 2x your wager. The Black Panther stands for the game’s Wild, which not only substitutes all symbols, except Bonus and Lava wild, to boost wins, but also delivers the highest payout of 100x the bet for 6 on a payline. Landing 3 Wilds will pay 3x your wager.

A Totem Mask represents the Bonus symbol which triggers the Free Spins Feature when 3 land anywhere on the reels. The volcano will first add more Bonus symbols to increase the number of free spin awarded. During free spins, the middle reel is comprised of Lava Wilds only. This is just one of the ways this slot offers to provide players with an intense gameplay. Wildcano showcases 4 different in-game features which turn the temperature up and award handsome sums. In the Sacrifice feature no-win paylines burn out and make room for new icons. During the Magma round lava fills 2 winlines thus destroying existent symbols and putting new ones to reward you with a guaranteed win. Look out for Pyroclasts which erupt from the volcano and land on the reels as Lava Wilds to provide greater chances of wins. Any losing spin could cause an Earthquake which will award a respin of the reels.

WIldcano is available on all devices, mobile, tablet and desktop alike, so you can spin the reels of this slot anytime, whether you choose to stay at home or play it while on the move. The game will keep you busy for hours due to its intriguing and innovative mechanism, but also because of the steadiness of payouts provided by a solid Return to Player set at 95.1%.