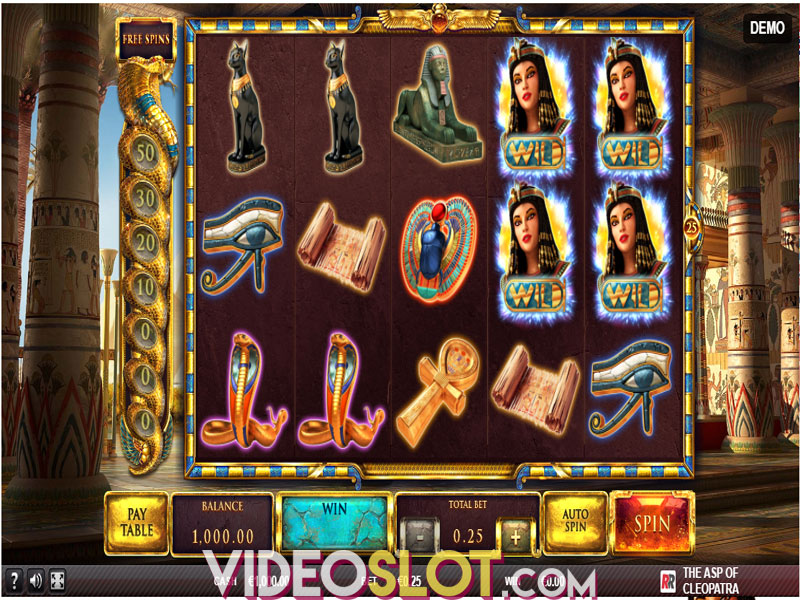 About The Asp of Cleopatra Slot
Rating:

The Asp of Cleopatra is an adventurous and intriguing Red Rake Gaming video slot released in December 2017. This aspiring software provider did an amazing job when designing an Egyptian-themed game which shows off stunning graphics, smooth animations and a mysterious musical score. At the same time it’s riveting because of profitable features it boasts, firstly the Wild Substitutions which increase chances of wins, then the Wheel of Gods Feature and, in the end, a Free Spins Game with up to 1000 free spins.

The Asp of Cleopatra is a 5-reel, 3-row slot configured to 25 fixed paylines supporting bets between $0.25 and $200.00. This range will please both those who prefer to invest lower sums and high-rollers. Click on the Spin button and wait for the icons to land on consecutive reels from left to right in order to award prizes. Those icons which are part of a winning combination will disappear from the reels, making room for new ones to fall in their place and provide chances of new, additional wins. If you’d rather relax, initiate Autospin so that the game continues automatically for a chosen number of times.

The mighty Egyptian goddess, Cleopatra, stands in all her grace, representing Wild which substitutes all symbols except Bonus to boost chances of wins. Those fortunate enough to land 5 Wilds will receive a 4800 coin prize. The golden Asp awards 1600 coins for 5 of a kind. Other high-value icons include an Ankh, Scarab and Black Cat delivering 1440, 1280 and 1120 coins respectively when 5 appear on a winline. Symbols awarding lower prizes are represented with the Sphinx, Eye of Horus, a Scroll of Parchment and a golden Cup which pay 960, 800, 640 and 480 coins consequently for 5 matching icons.

Land at least 3 Bonus symbols in any position to start the Wheel of Gods mini-game where you will have to choose between two mighty Gods, Horus and Anubis, to be your protector. Each God is represented with a color and picking one will start the Wheel turning. If your choice matches the color shown after the spin, the Multiplier will be awarded, you will be allowed to keep playing and have a chance to increase your initial bet up to 100x. If the shown color differs from your choice, a Multiplier will be awarded and the feature will end.

To trigger the Free Spins Game you are to connect 4 or more Respins. The number of free spins awarded will be shown on the Progress Bar on the left of the grid, with a maximum of 1000 free spins and the Asp becoming Wild during this feature.

The Asp of Cleopatra is a medium variance slot in which the theoretical Return to Player percentage stands at 95.3% providing solid payouts in the main game. However, the Free Spins Round, which holds the greatest win potential, is not easy to trigger. The slot is available for play on mobiles, tablets and desktops alike.