You are at: Home Playtech Iron Man 3
back to all games
Iron Man 3 Slots Game
Game Details 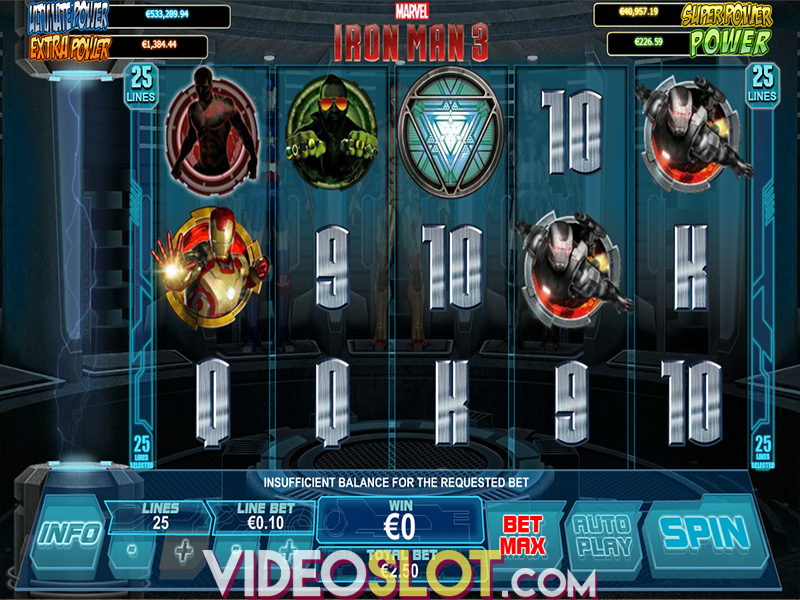 Iron Man 3 is one of the top played Marvel Comic slots from Playtech and this game features 25 paylines and the chance to win random progressive jackpots. The game is based on the popular comic book Iron Man and there are some amazing features that have been added. The game can be played for various bet amounts that range from $0.25 to $250 per spin, though no maximum bet is required to win any of the progressives.

There are three scatters in use in the base game, which are Mark 42, Iron Patriot and war Machine. Getting these three on the first, third and last reels will trigger the amazing All Systems Go Re-Spin game feature. These icons will remain on the reels and one spin will be offered.

The main bonus in the game is the Hall of Armor Free Spins, which is triggered with three or more Iron Man logo symbols on the reels. Here, players will select from three different modes based on characters. The first is the Iron Patriot Free games, with 15 free spins and a Dynamic Multiplier that can offer up to 5x payouts.

There is also the Mark 42 Free Spins, which will offer players 10 free spins and Freezing wild symbols. If a wild appears on the reels during a free spin, it will remain in place for three spins. If a Mark 42 symbol appears on the middle reel, players will get three extra free spins.

The final feature is the War Machines Free Spins and this offers 8 spins and random wilds. Before every spin, three symbols will become wild and will appear anywhere on the reels. This feature creates the best chances at winning.

Iron Man 3 has some great game features, but players will be drawn to the random jackpots. There are four jackpots hat can be won at any time and following any spin, players could enjoy the Random Jackpot Feature, where they will have their chance to collect one of the jackpots. This video slot game is one of the most played at Playtech casinos and is a joy for any player that likes a themed game with multiple bonus features.