You are at: Home Playtech Ice Cave
back to all games
Ice Cave Slots Game
Game Details 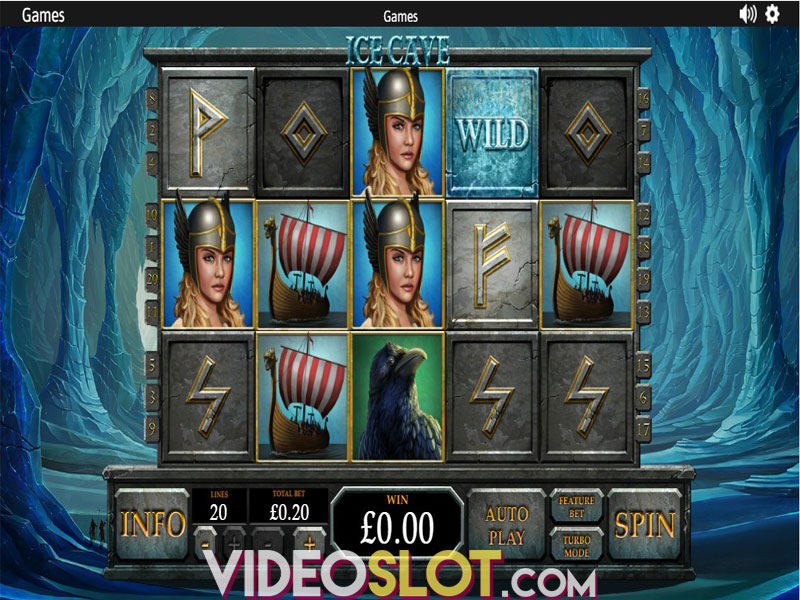 It’s getting cold around here, you’d better equip yourself with some warm clothing, but also bring an axe or a sword, as you’ll be dealing with no less than Vikings. It’s the Playtech Ice Cave video slot and it’s all about these far northern people and their cracking Wilds. The stone reels are housed somewhere deep inside the cave, but to be honest, the graphics don't really depict it as lively as we are used to with Playtech. On the other hand, the gameplay is extraordinary, which is more than enough to compensate for visual effects. Let’s discover the world of Vikings and Norse mythology by starting with some basic info.

Ice Cave is a video slot played at 5 reels with a possibility to choose whether you’ll play on 10 or 20 paylines. A line bet varies from $0.01 to $1, so depending on the number of active paylines, the max bet can be either $10 or $20. As usual, the Autoplay option is included offering 99 consecutive spins or until you hit a feature and Turbo Mode grants the faster gameplay. If you decide to engage yourself in this Playtech adventure, you’ll be happy to know that you can give it a spin from any mobile, tablet or desktop device powered by Windows, iOS or Android.

Having cleared that up, let’s get off into some real action. Warriors, wolves, ravens and ships are high-value symbols, while five runes that signify joy, wealth, power, victory and protection are of lower values. Though there is no Scatter, the game is not less interesting as it comes with two Wilds, Ice and Hammer, that substitute for all other symbols in the game and multiply all wins by 3x. Ice Wilds land on the reels 3 and 4, and when the Feature Bet is on, it can appear on the fifth reel, as well. Once it lands, Ice Wild will remain frozen, until Hammer Wild appears and cracks it. Hammer Wild appears only on reel two.

The Feature Bet is optional and it costs a bit. If you are willing to pay extra, to be exact the half of your stake, you can turn it on and increase your winning chances by adding Ice Wilds on the reel 5. All the wins that are formed with Ice Wild are multiplied by 5, so it might just pay off to deposit some extra money in the beginning.

Playtech Ice Cave is quite enjoyable medium to high variance slot machine that comes with the RTP of around 96%. Frequent features keep you interested for quite a time, so if on top of that you are fond of Norse mythology, Ice Cave may be the perfect choice for you.