You are at: Home Microgaming Seven 7s
back to all games
Seven 7s Slots Game
Game Details 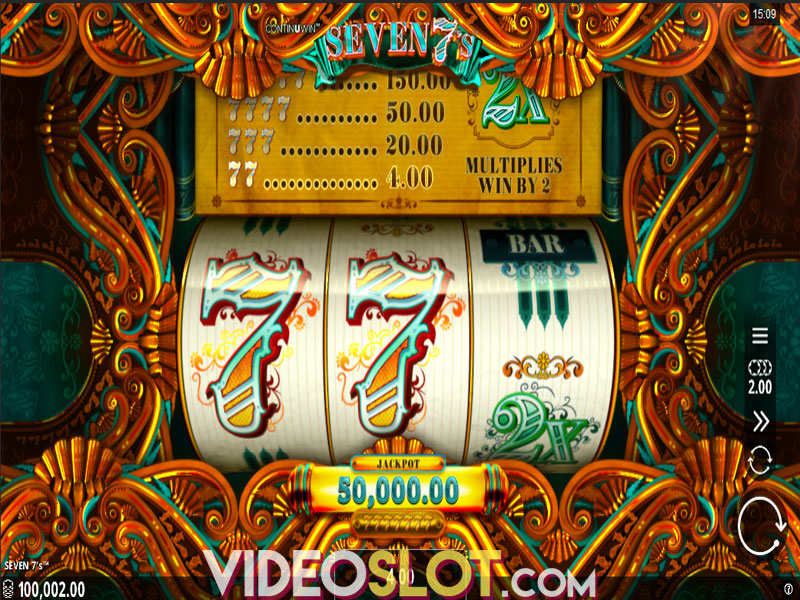 Microgaming and its partners at Crazy Tooth Studio are taking players on a unique adventure, which proves you don’t need an unusual reel set to offer exciting gameplay. Titled Seven 7’s, this beautifully-styled slot comes with a single reel, though the play area can be expanded later in the game. Only a single reel is no obstacle to claiming nice payouts, with prizes of up to 25,000x the stake waiting for those lucky enough. Helping you on your way to winning are such features as expanding reels and Wild Multipliers, while the RTP of 96.60% is slightly above the industry average.

Seven 7’s is a classic-themed slot, which is evident as the game uses some classic symbols, such as sevens and Bar. However, despite the theme, this unusual game is very modern, both in terms of graphics and gameplay. Microgaming’s February 2020 release starts with only 1 reel, while than number can be increased to 7. There’s also one payline on offer. A $0.20 bet is enough to get the reel(s) spinning, while the maximum stake is worth $10 per spin. This is considered to be a highly volatile slot, which in practice means it can award staggering payouts. That said, the largest one is set at $250,000!

Developers at Crazy Tooth Studio have paid special attention to the design of this video slot, which combines the classic theme and the modern graphics to offer players a nice visual experience. We should point out this unique blend of Art Deco and steampunk, and filled with vibrant colours, further adds to the excitement. There are only 3 different symbols featured in this game – the seven, Wild Multiplier and the Bar symbol. Wild Multiplier also serves as the regular Wild symbol, while the bar, unfortunately, doesn’t award any cash award whatsoever.

Seven 7’s uses a brand-new game engine called Continuwin. The game begins with only one reel position, where you can land 1 of 3 available icons. As we’ve mentioned, these icons are the seven, the wild multiplier and the bar symbol, with the latter being practically useless, as it will not award any payout.

Wild Multiplier also acts as Wild, although the only symbol it will be able to replace is the seven. As its name suggests, it’s also a multiplier, doubling the size of every payout, even doubling the game’s top jackpot.

Seven 7’s is certainly an interesting addition to Microgaming’s offering, and although it’s rather a simple game, it can be very exciting, especially due to its new game engine. Playable across all platforms, it’s all about landing the lucky seven symbol, and triggering the Respin feature. Its top payout is worth 25,000x the maximum stake. Be careful as the game’s high variance can quickly empty your pockets.

The seven is the only symbols forming winning combinations. Landing it will activate a respins, locking the reel 1 and adding another reel to the grid. Land another seven, or a wild multiplier to retrigger the respin and add more reels. This can go on until there are 7 reels on the screen.