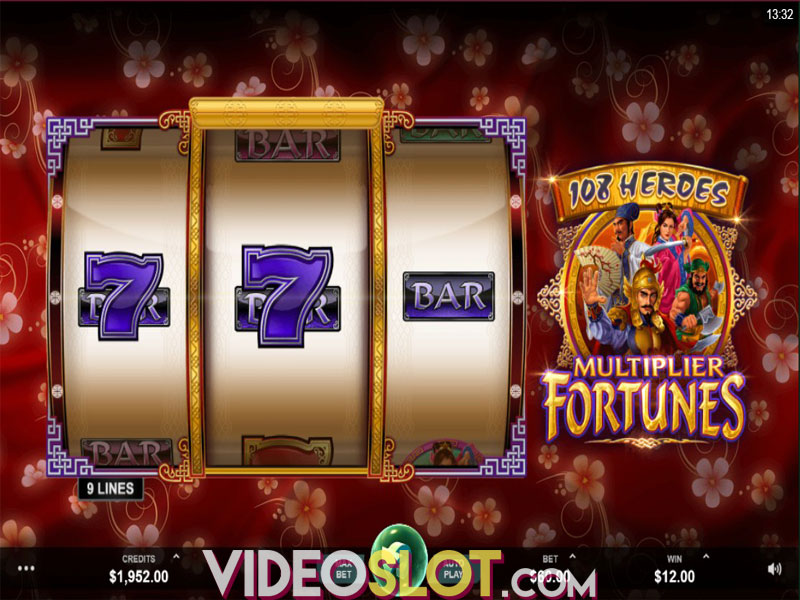 There’s something really satisfying about classic slots. We have to admit, in this modern day and age, we’ve been spoiled with numerous special features, unique ways to wins and various additions that simple would not have been able to exist back in the day. However, with just 3 reels, there’s not a lot of fancy tricks you can pull off. And back in the days of old physical machines, most developers didn’t. However, in an ever increasingly competitive market, developers have come back to try their new tricks on this old brand of game, and it produces some of our favorites. As such, we had high expectations out of 108 Heroes Multiplier Fortunes when it came out. Apart from the name being a handful, the Microgaming title seemed to have the potential to tick all our checkboxes. It offers 3 reels and 9 paylines, a decent maximum win and a single special feature that allows you to play it a bit differently than what you are normally used to.

Actually playing the slot, we have found some of our expectations were spot on. Others sadly missed their mark. The game feels great to play, especially if some of Wilds appear and trigger a re-spin. The visuals make it clear it’s aimed towards the Oriental market, but it also emulates the feel of a physical machine, something that gamblers can attest is popular with three reel slots. While the name is a mouthful, it is rather accurate. Your wins outside of these Wild multipliers popping up are usually below what you wagered or just slightly above it. This is somewhat better than how it used to be, where the machine would simply munch your coin counter whole instead of giving some of it back as a minor win, but it’s very easy to lose a lot of cash at once, and the multiplier wins for us haven’t been enough to break even.

Multiplier Wilds are the only bonus in 108 Heroes Multiplier Fortunes. It works with a simple premise – it offers an increased multiplier from 2x to 5x to appear on the reels. 2x can appear anywhere, while 3x to 5x can only appear on the middle reel. If any of the multipliers appear on the middle reel, they trigger a single re-spin, and all of them act like Wilds. As such, you can theoretically reach a good high score if you line up all the multipliers in the right spots, but it’s just as easy to dig yourself into a ditch. Microgaming isn’t known for making wins generous or making them happen often, and while this game has a higher potential win than Break Da Bank from the same developer, we’d still opt for the older one if given the chance.

It’s hardly a shining star, but it does have moments of glory. The bonus does keep things varied and it can be fun spinning over and over in hopes of activating it. But a big part of slot appeal has always been in value as well, and the thrill of a winning combination giving you a sizeable score as payoff after spending a lot of dead spins. 108 Heroes Multiplier Fortunes doesn’t have a lot of dead spins, and it’s not generous with any larger wins either. This means you’re slowly bleeding money. If you’re in it for the fun, it’s fantastic. If you want value, you’ll have to look somewhere else.