You are at: Home Microgaming Dragon Shard
back to all games
Dragon Shard Slots Game
Game Details 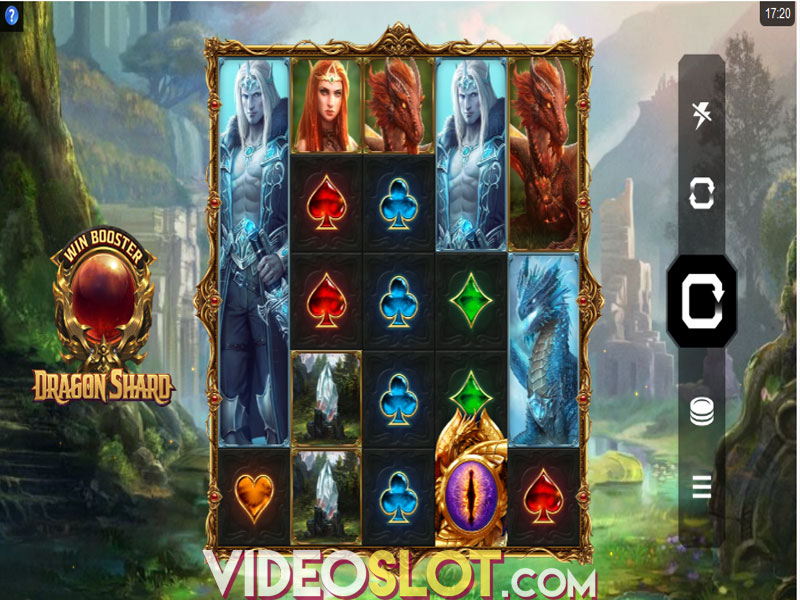 Brought to you by Microgaming, Dragon Shard is a fantasy-themed video slot where you will experience the battle between the world of fire and ice. It is created by Stormcraft Studios exclusively for Microgaming-powered online casinos and offers a maximum payout of 160,000 coins in a single spin.

The slot is played on a 5x5 layout with 40 paylines to land your winning combinations across. The reels are set against a hazy backdrop with ancient temples visible in the distance. To play the game, you will have to wager at least 5 coins per spin while the game allows you to wager up to 20 coins per payline. With a coin value ranging between $0.02 and $2, a total bet can be anywhere from $0.10 and $200 per spin. Such a wide betting range will suit punters of different playing styles, definitely. The game allows you to increase the speed of the reels and to activate up to 100 automatic spins.

Once you enter the fantasy kingdom, you will meet the Fire Queen and the Ice King trying to obtain the Dragon Shard, an ancient artifact. These two appear on the reels in stacks of 5 symbols and are the top paying regular icons. Other high-value symbols include Fire and Ice Dragon and the Dragon Shard itself. The rest of the positions are filled by playing card suits.

As you spin the reels, you will benefit from the Mystery Symbols feature with Mystery icons landing on the reels to transform into one of the symbols at random. The game comes equipped with Win Booster, an extra feature that activates the win both ways engine. At the same time, Win Booster enables you to benefit from Mystery symbols turning into high paying icons and Wilds only. However, it doubles your stake.

The logo of the game is Wild that replaces all symbols bar Scatter represented as the dragon’s eye. To trigger the Free Spins feature, you need 3 or more Eye Scatters anywhere in view. The feature awards 10 free spins with Mystery Reels present on the reels 2, 3 or 4 on every turn. These special reels will contain Mystery icons only and the number of them depends on the number of triggering Scatters. Land 3, 4 or 5 Scatters to trigger the feature and you will get 1, 2 or 3 Mystery Reels respectively. Whenever Scatter lands during free games, you are granted an extra free spin.

Another clone from Microgaming. This time, Stormcraft Studios and Microgaming cloned their most successful 2018 title Fortunium. If you have played it, you will easily get what’s going on in Dragon Shard. We have to admit that we would like to see something innovative coming from the Microgaming kitchen and their partners. Although Dragon Shard is visually appealing and offers plenty of action along with a high RTP of 96.77%, it is just another clone and we cannot get over it.