You are at: Home Habanero London Hunter
back to all games
London Hunter Slots Game
Game Details 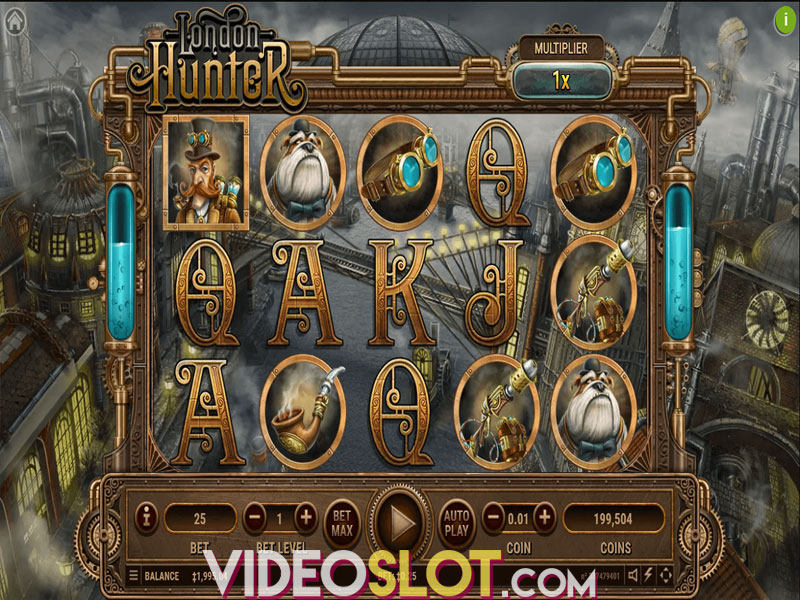 Alternate universes are always a great deal of fun to think about. They are not everyone’s cup of tea, and that is understandable. But it can be very fun to theorize how different the world might have looked if you make even a single change. One thing leads to another, and suddenly, you find yourself following a red-headed man with an impressive moustache through steampunk London hunting a raging T-Rex. The Habanero slot has a gorgeous background image, some cool animations and lucrative special features which will most certainly remain burned in your memory. The maximum win is worth 1,200x your total bet.

London Hunter is a 5-reel, 3-row game with 25 fixed paylines. Players can set their wagers between $0.25 up to $5,000 per spin. Pressing the spin button makes the reels move, revealing new icons in the place of old ones, and potentially leading to a lucrative winning combination. Alternatively, gamblers can use the Autoplay button to keep spinning the reels until the button is pressed again, or you run out of money, whichever option comes first.

The symbols and background image both work together to really create that steampunk aesthetic this alternate history London has. Playing card royals are done in a similar style, so they fit in with more unique icons like a smoking pipe, a pair of engineering goggles, the electric rifle used to hunt dinosaurs, a gentlemanly pit bull, and, of course, our eccentric hunter. The dinosaur also appears as a symbol, but only as Wild. It can be used to substitute for other icons, and has no cash prize of its own.

On either side of the reels are two fuel tanks. The right fuel tank, when filled, activates Wild Expansion, while the left fuel tank triggers a 3x multiplier.

Wild Expansion hits when the fuel tank is full and a T-rex symbol appears at the same time as the hunter. When this happens, T-Rex Wild expands to become a 2x2 icon. If two hunters and two T-Rexes appear at the same time, it rewards two expansions instead of just one.

Meanwhile, filling the left fuel tank adds a 3x multiplier, which is activated when any winning combination happens – whether that happens to be the win of a lifetime, or a small cash prize.

Free spins are activated when a hunter appears on the first reel, his rifle on the second reel and T-Rex Wild on the fifth reel. This gives players 10 free spins to start with. If the left fuel tank was full when the special feature began, then extra turns begin with a 3x multiplier. Both fuel tanks start empty and grant a small prize when they fill up – the left one increases the multiplier by one and the right fuel tank adds two more free spins.

London Hunter is a title with a medium volatility and an RTP of 97.94%, which is above average for this developer. While the graphics and animations are great, it is the gameplay and special features that really make this slot stand out.