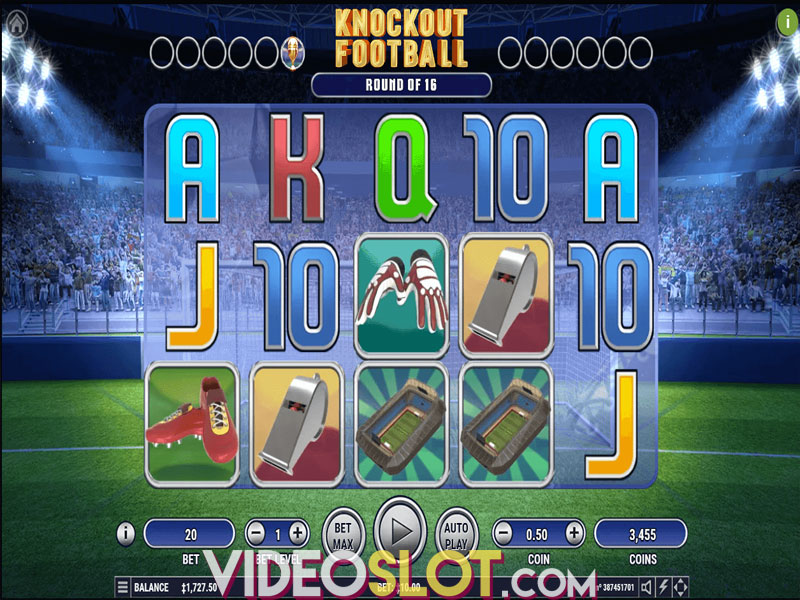 Ah, football. The most popular sport in the world by a wide margin, and one that has millions of people across the globe tuning into matches to support their favourite team. Until now, you had to make a choice between betting on the latest football match or playing your favourite slot, but Habanero saves the day with their latest release! Top-notch visuals, an excellent audio design which will make you feel like you are at a stadium yourself, and a somewhat complicated, but super fun special feature all come together for an experience of a lifetime. The maximum win is worth 500x your total bet.

Knockout Football is a 5-reel, 3-row video slot with adjacent pays. Simply collect three or more identical symbols in adjacent positions, and they will always grant a win, regardless of starting position. Players can wager between $0.20 up to $5,000 per spin. Pressing the spin button will make the reels move, revealing a brand new set of icons in the place of old ones. Using Autoplay, gamblers can make the reels spin over and over without having to tap Spin multiple times.

Symbols include playing card royals: 9, 10, J, Q, K and A in their regular, colourful designs, and some unique artwork like goalkeeper gloves, red football shoes, a referee’s whistle, a large stadium, a golden cup and a football. The football is the Wild symbol and can substitute for all icons. The golden cup is both Scatter and Wild and adds a 2x multiplier when part of any winning combination.

When three or more Wilds are collected, there is a chance the Super Striker bonus will fire. Alternatively, it is guaranteed to fire once you collect six Wilds. All collected Wilds are then thrown back onto the reels in random positions, on all positions except the first reel.
In a similar fashion, you need to collect six or more golden cup Scatters to trigger the Knockout Free Games. During these, Wild appears on the middle position on the third reel and is kicked back and forth. When a kick causes the Wild to land on the centre position of the rightmost reel, a goal is scored for the players. If the opposite happens, the enemy wins a goal. Every time a goal is scored, or the 45 or 90-minute mark are reached, the ball is reset to the middle of the playing field. This special feature is played in four rounds. Placing first, second or third rewards you with 500x, 100x or 25x your total stake.

Knockout Football may not be the latest or greatest release Habanero have ever done, but the special feature makes it stand out in a sea of other football themed titles. The slot has medium volatility with an RTP worth 96.8% and offers some amazing visuals and top-notch sound design to really immerse players in the world of football.