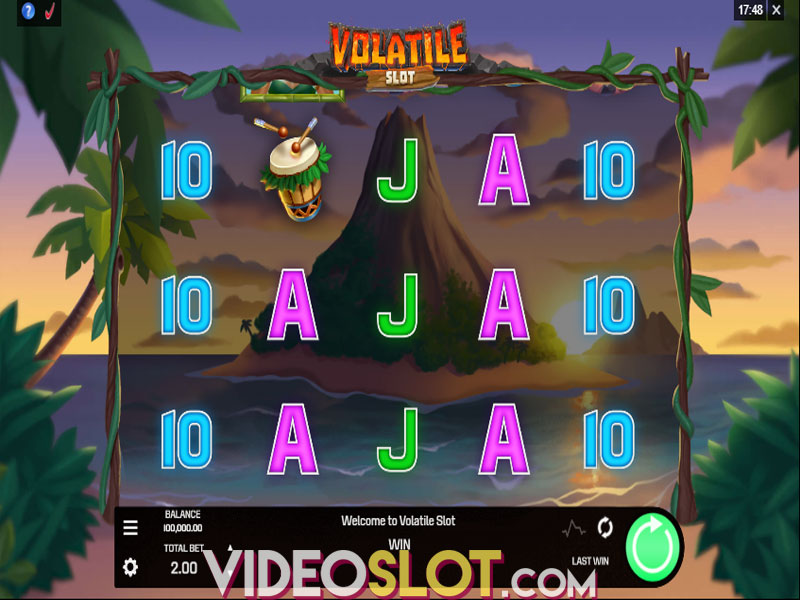 Expect earth shaking, lava spattering and prizes popping-up in Golden Rock Studios’ online slot named Volatile Slot launched in November 2019. You’ll relish exceptional graphics, swift animations and a dramatic audio that intensifies the excitement while playing. Look out for Substituting and Exploding Wilds, Multipliers and a Free Spins Feature, all providing chances to get hands on prizes reaching values of 25,600x your bet. The RTP of 96.1% is the industry average.

This game is played with merely 10 fixed paylines distributed across a 5x3 layout. Once a minimum of 3 identical icons hits adjacent winline positions from left to right, payouts will be awarded. Before pressing Spin to start the game, adjust your desired bet which can span from $0.10 to $20.00 per spin. For the reels to spin uninterruptedly, enable Autoplay.

Dare to set foot on this volcanic tropical island and hope that you’ll be rewarded generously for your bravery. Playing card symbols 10 through Ace are low-value icons that issue from 6x to 10x your wager when 5 matching ones appear on a payline. High-value icons include a Native lady, Shrine, Fire and Drums which grant between 11x and 40x the stake for 5 of a kind. The game boasts two Volcanic Wilds which appear on reels 2, 3 and 4 only. Besides substituting other symbols when contributing to wins, Wilds can also become Exploding Wilds which grant an up to 4x Multiplier. Furthermore, Wilds additionally represent Scatter and are in charge of activating the Free Spins Bonus.

As has already been mentioned, Wilds hold an exceptional winning potential since they explode to deliver Multipliers. If you are fortunate enough to obtain more than one Exploding Wild, their Multipliers will be put together and can amount to values of up to 64x. On the other hand, getting any 3 Wilds on the grid will allow entrance to the Free Spins Feature that can be retriggered. If you score less than 20x the bet during this Bonus, you will be rewarded with 10 extra freebies.

The extremely high volatility caters for those players who take gambling a tad more seriously than the rest of us. However, chances to reach up to 512,000 coins on a single spin will attract many a punter. One thing is for sure, an abundance of excitement and prizes awaits you in this riveting game. Enjoy it on any device of your choice, since the game can be played on all portable devices and desktops alike.