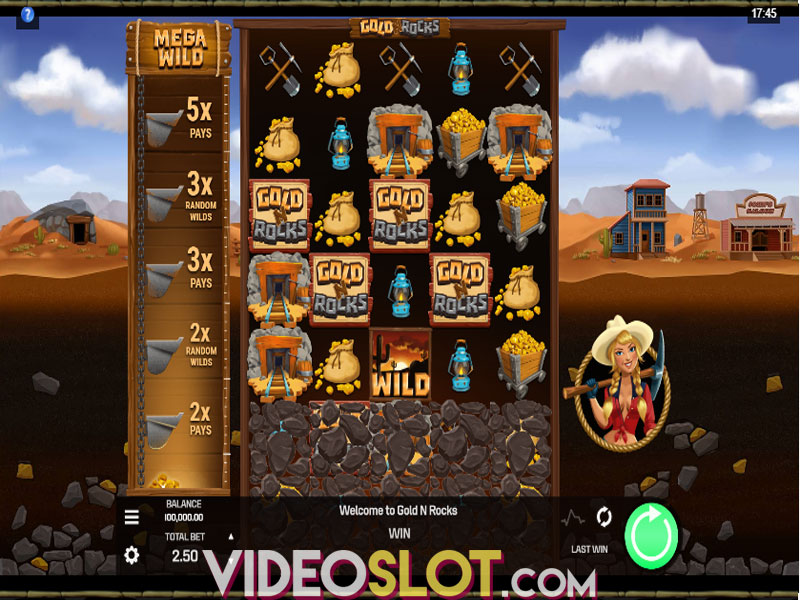 Undreamed piles of gold lies buried in Golden Rock Studios online slot Gold ’N’ Rocks launched in September 2020. Enjoy top-notch visuals, neat animations and a bouncy soundtrack that helps increase excitement while playing this exquisite and unusual title. You’ll benefit from Wild Substitutions, In-game Modifiers, Expanding Reels and a Free Spins Round, all carrying the potential to issue prizes of up to 304,700 coins. The RTP of 96.09% makes sure the game is rewarding enough.

This game is played on a 5x5 layout with symbols dropping from above. Prizes are awarded when 3 or more matching icons appear on adjacent positions horizontally or vertically. Symbols that are part of the win combo explode and make room for new icons to fall down. With each win additional rows get unlocked so that the grid can expand to occupy up to 5x10 positions. Before pressing Spin to start the game, choose the size of your wager spanning from $0.50 to $50.00. For the reels to spin uninterruptedly, activate Autoplay.

A Lantern, Pike and Shovel and a bag filled with gold nuggets represent low-value icons that each awards 500x the bet if you obtain 10 matching ones. High-value symbols include a Cart full of gold, a Mining Tunnel and the game’s Logo issuing 600x and 800x the wager when 10 appear. The Dynamite symbol works as Scatter capable of activating the Free Spins Round. Wild, depicted with a Western Sunset, replaces all other icons except Scatter when forming wins, but also delivers payouts of between 0.10x and 1,000x your bet when from 2 to 10 land.

As has been said, the more you win, the bigger will the layout become and offer greater chances for wins. You will also collect Feature points that help release features. The Feature you’ll benefit from depends on the number of points you’ve collected. You can obtain Multipliers or Wilds to enrich your gameplay. Finally, at least 3 Scatters anywhere will grant you entrance to the Free Spins Round. 8 freebies are awarded and new ones can be earned if more Scatters land.

One thing is certain, a host of rewarding features awaits players in Gold ’N’ Rocks video slot. There are many opportunities to land wins and at the same time enjoy a dynamic gameplay on any device of your choice. Try it out whenever you want as the game is playable on all hand-held devices and desktops alike.