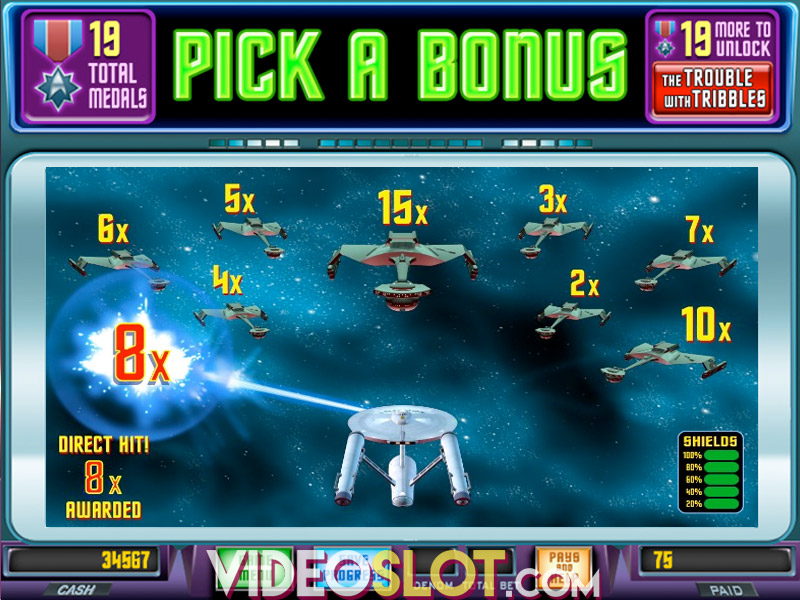 With the amazing success of the first Star Trek slot, WMS has followed it up with another Star Trek release, Explore New Worlds. The game has 25 paylines juts like the original and the theme is the same, though it is based on another episode. To play this version of the game, players will have had to win 100 Medals from Star Trek Red Alert. The sequel slot offers an attractive jackpot of 4,500 coins and there are wilds, scatters and some great bonus features.

The Insignia is the top paying symbol and players will benefit when the Star Trek logo appears, as this is the game wild. There is also the Feature Logo, which will be the scatter. The only new symbols added to this version of Star Trek are aliens from outer space. The game also uses the same reel set as the original game and the features are the same as well. The only difference is the addition of a bonus round, called Beam Me Up.

The Beam Me Up feature is triggered when 3-5 scatter Feature symbols appeal on the reels. A bonus screen will them appear on the reels and players will see a group of five crew members. These members will target different bonus objects. Following this, players will choose different members of the crew to target the bonus objects and reveal cash prizes, Medals, Collect items or a symbol that will end the bonus feature.

Though this game is quite similar to Red Alert, the addition of a bonus feature is quite appealing and offers more chances to win. Anyone that loved the action of the original Star Trek game will surely love the action of this game as well. With high payouts and some great bonus wins, Star Trek Explore New Worlds has become a top rated themed slot from WMS.