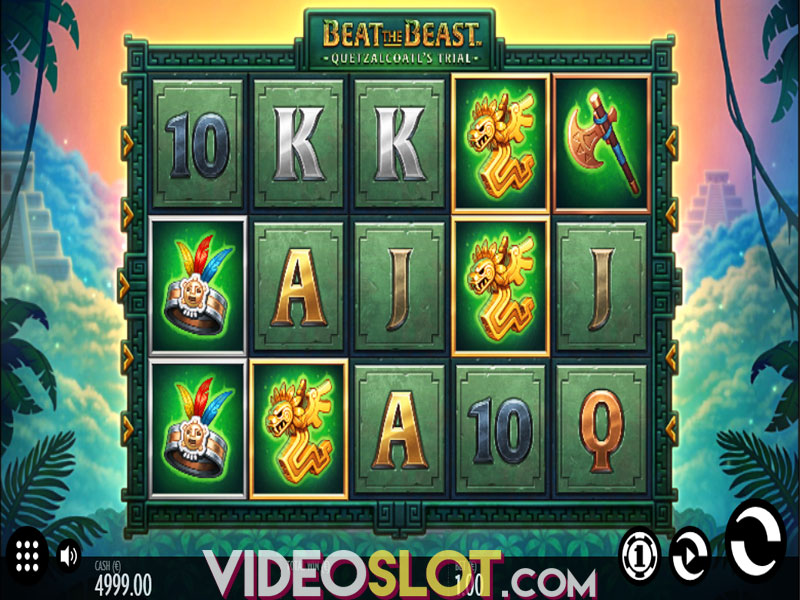 The fourth installment of the Beat the Beast slot series will take us to the Aztec culture and mythology. The main character of the story is Quetzalcoatl, a feathered serpent deity, one of the most important gods in Aztec culture. The Thunderkick product features a standard 5x3 reel grid and benefits from 9 paylines, which pay left to right. The central attraction of the 2020 release is the Bonus feature, offering 5 different levels where high-paying icons get replaced in a certain order. The biggest possible payout gamers can expect in a single spin is 5,555x.

The rules of the game are quite simple and even mere beginners will spin the reels like pros in no time at all. The 2020 release features five reels, three rows, and offers 9 fixed paylines, which pay left to right. To win payouts, players need to land at least three matching icons on a payline, beginning from the leftmost reel. Quetzalcoatl icon is the only one that pays even for two of a kind. Gamers can wager as low as $0.10 and as high as $100 per single spin.

The reels are set in the jungles of Mesoamerica, and there are several temples in the background, probably dedicated to Quetzalcoatl. The highest-paying regular symbol is the famous deity, while the Quetzalcoatl Emblem represents both the Wild and the Scatter. So, the golden Emblem will substitute for all other icons, while three or more of them will trigger the Bonus game. Among regular icons, players will find the golden statuette of Quetzalcoatl, an Aztec Crown, an Axe, and a Golden Cup. Playing cards are sued for low-paying symbols.

The central attraction of the Beat the Beast: Quetzalcoatl’s Trial video slot is the Bonus game. Players need to land 3 or more Wilds/Scatters on the reels to trigger the Bonus. They will be rewarded with 10 freebies and they need to pass levels in order to remove the high-paying symbols, replacing them with the next high-value icon in the line.

To progress to a higher level, players need to collect Wilds that land on the reels during freebies. Each Wild will come with an orb. These orbs are taken and placed in the Meter. Every time the Meter is filled with 5 orbs, you will progress to the next level, and the corresponding icon will be replaced with the next high-paying symbol in the following order: Cup, Axe, Crown, Quetzalcoatl Statuette. Get 3 or more extra Scatters on the reels and you will get 10 more freebies.

In our humble opinion, Beat the Beast: Quetzalcoatl’s Trial is not the best installment from the Beat the Beast slot series, but it is not bad either. We are action junkies, and we require more additional features in our video slots. The Bonus game is not that bad, but it will not be an easy task to upgrade to the highest level. Those of you who manage to reach level 5 will be in for a treat, because massive wins will be waiting for you, up to 5,555x bet.