You are at: Home RTG Secret Symbol
back to all games
Secret Symbol Slots Game
Game Details 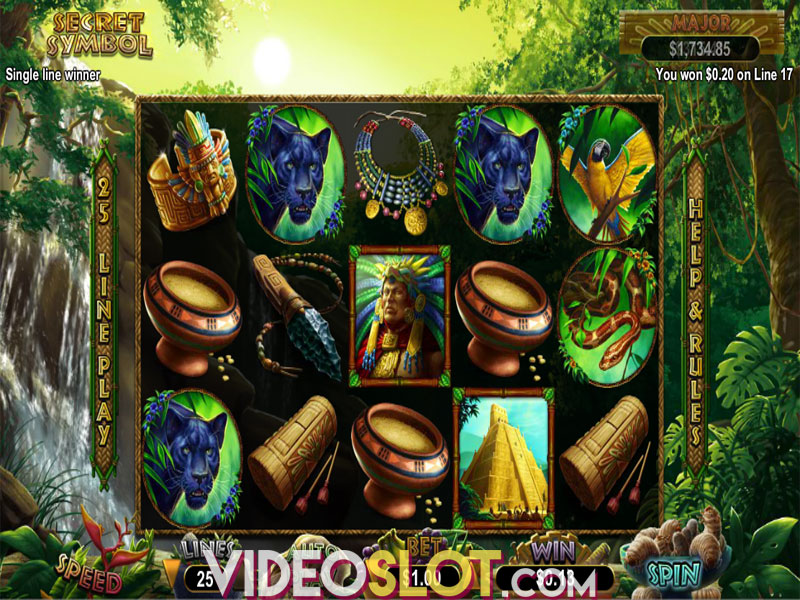 Secret Symbol slot is the 2017 slot release from RTG and it features one of the most popular themes ever – treasure hunting in long lost cities and civilizations. The RTG title depicts the world of Aztecs reviving the atmosphere with unspoiled nature of the jungle with a live waterfall accompanied with thrilling Indian music and sound effects in the background. The whole scenery is complemented with stunning symbols arranged over 5 reels and 3 rows with 25 adjustable paylines. Players can enjoy exploring the ancient civilization on PC, mobile and tablet devices with an equally amazing experience from only $0.01 per spin. It is possible to choose how fast the reels will turn with the Speed option and how many times in a row with the Autoplay option.

The shades of the main screen is lighten up by green, golden and wooden symbols, perfectly depicting life and culture of Aztecs.They include necklaces, drums, totems, snakes, panthers, parrots and more with different paying values. All of the items were revered by Aztec people, so be careful how you handle them. After all, it’s in our best interest to keep the Aztec Chief content as he stands for Wild and substitutes for all other symbols except Scatter. In order to reveal the hidden treasure, you’ll have to work with him who is, along with Scatter pyramid, the most lucrative symbol.

Wilds can form winning combinations on its own and if you want your balance to go crazy, hit four or five Wilds on an active payline and enjoy the generosity of the Chief. Pyramid Scatter is in charge of free spins, so land three or more Scatters and you’ll get 10 free spins. It wouldn’t be that interesting if only free spins were the prize. RTG has included some extra features, so don’t be surprised when you see the multiplier which can go up 20x. Chief Wild is also playing his part expanding over reels two and four, increasing the chances for landing big wins. The feature is known as the Secret Symbol feature and can be retriggered by landing three more Scatters during free games.

One more way to benefit from the Secret Symbol slot is a progressive jackpot. Actually, the game offers two of them, Minor and Major. Jackpots are triggered randomly at the end of any spin, no matter if it’s winning one or not. They usually start at $250 and $1,000 respectively and the exact amount is displayed in the top right corner of the screen. We must hand it to RTG for succeeding to keep the excitement during the entire gameplay, knowing that there is possibility to land some bumper payouts after every single spin.

Secret Symbol video slot is perfect for all the adventurers and mystery lovers seeking for descent prizes and some exciting gaming experience. Stunning graphics and sound effects are a great complement to lucrative symbols and features as outstanding chances for collecting payouts. Pay your respect to the Chief and all the spirits and spin those reels, who knows what is hidden inside the pyramid.