You are at: Home RTG Lucha Libre 2
back to all games
Lucha Libre 2 Slots Game
Game Details 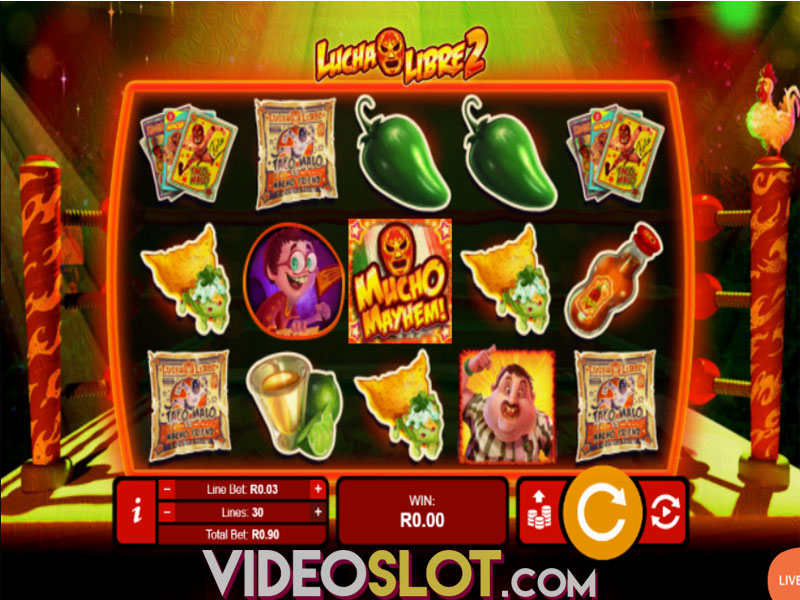 Lucha Libre 2 comes as a direct sequel to the highly popular, Mexican wrestling-themed slot machine of the same name by RTG featuring wrestlers, but, more importantly, offering multiple lucrative features, such as expanding Wilds, the Free Spins feature, up to 10x multipliers, Time to Rumble Bonus and the Fist of Fury Respin feature that can help you win a whopping 50,000 coins on a single spin! Regardless whether you enjoy the wrestling theme or not, you are guaranteed to be hugely entertained and, hopefully, rewarded in this vibrant game that caters to the needs of most players.

Before you team up with luchadors, we would advise you to refer to the paytable and adjust your bet ranging from $0.30 to $30 per spin. Given that there are 30 fixed paylines, a coin size varies between $0.01 and $1 per payline. The Autoplay feature is also available and will come in handy if you wish to spin the reels without interruption for up to 1,000x. Finally, the Spin option will set the reels in motion after you've selected your stake.

The reels are home to theme-related symbols, such as wrestlers, which will act as Wilds that can appear on the reel three during main game. In addition, you will come across referees, spectators, green peppers, tequila shots, tacos, Cola drinks, albums and stickers. Mucho Mayhem acts as Scatter which is key to triggering the Time to Rumble feature. Fist Scatters, on the other hand, trigger the Fist of Fury feature.

Land not less than three Mucho Mayhem Scatters anywhere in view and trigger the Time to Rumble feature. Once in, you will get to choose between 3 comical wrestling moves which will help you blow the opponent. Depending on the fighting move you selected, you will win a certain number of free spins and the multiplier for your wins. The good news is, Fist Scatters will pop up on the reels one and two during this round, to boost your winning potential.

Land Fist Scatters on the first and second reel, with the third reel being covered by Wrestler Wilds and you will trigger the Fist of Fury Respin feature. Here, up to 4 reels will be filled with Fist Scatters, while the remaining reels will respin.

Should you fill the entire reel 3 with Wilds, wrestlers will multiply your balance up to 10x or pop up on at least one additional reel, improving your winning power substantially.

Lucha Libre 2 is a medium variance slot machine, offering a wide array of bonus features and special symbols, providing players with multiple chances for racking up some serious prizes. Keep an eye on Wrestler Wilds and Mucho Mayhem Scatters since those are necessary for activating rewarding multipliers, free spins, and extra respins. The highest potential win on a spin is a mouth-watering amount of 50,000 coins.