You are at: Home RTG Banana Jones
back to all games
Banana Jones Slots Game
Game Details 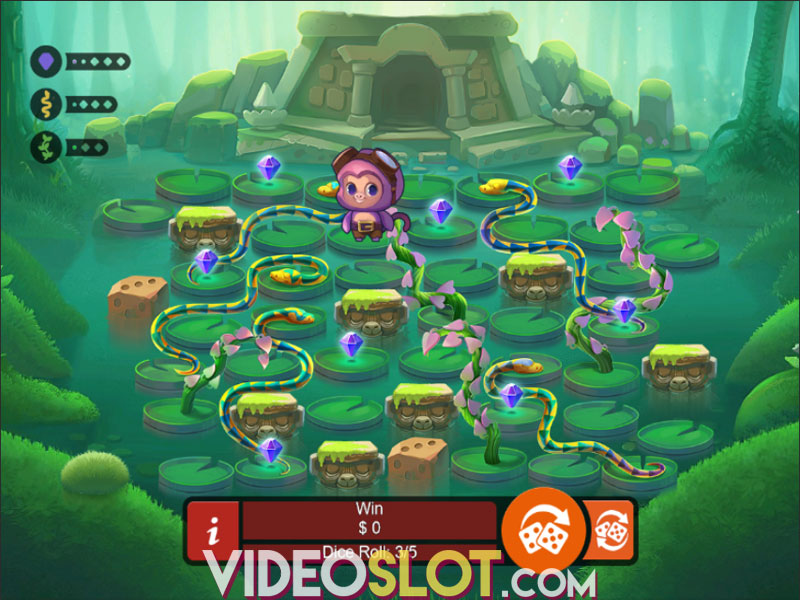 Not all games are created equal. Admittedly, we review a lot of video slots here and that’s simply because they’re the most numerous and popular type of gambling game. Poker, blackjack and baccarat need no reviews. If you’ve played one game, you’ve played them all and it’s just the matter of playing correctly to beat the dealer. But we always like getting something new and different to play and this time around, it’s something we never quite believed we’d see outside of a family night board game – snakes and ladders, this time, with cash prizes attached to it. There’s not much to say about, except that the maximum jackpot is worth 2,565x the wager and that there are no special features available.

The visuals on offer in Banana Jones aren’t the most spectacular thing we’ve seen. The cinematic intro really makes it seem a lot more appealing than it really is while you’re playing it. Banana Jones will jump around the field which is mostly static, and he’ll pick up gemstones and eventually reach the temple. The animations are solid, but not eye-catching, save for when the small monkey stands on top of one of the sleeping monkey heads, which leads to a cool transition where the giant statue rises from the ground, and allows our hero to spin the bonus wheel containing cash prizes. There are no symbols to collect – you have three different gemstones you can collect on your journey towards the large temple and those can award cash prizes, as well. But the real meat and potatoes come from traversing the entire map in the five dice throws you’ve been allotted and entering the temple.

Once you reach the temple, you launch a point and click special game in which you click through a whole swathe of chests that are sitting on the ground. There are five prizes in total you can win, each one denoted by a different color and fruit and the largest prize you can win is 2,565x the wager for, you guessed it, a golden banana. Which prizes you draw from the chests is entirely random, so there’s really no point in stressing too much on what you end up getting as it’s more luck based than video slots are.

That said, even getting to the temples can be a troublesome thing. Beyond the large statues we mentioned above, you also have vines and snakes. You see the snakes in the small movie that plays before the game, as they’re soldiers of the game’s villain. If you land on one, you slip down to a lower position, setting your progress back. In much the same way, vines allow you to climb up them, and skip part of the map and get to the temple faster.

When it’s all said and done, Banana Jones is fun to break up the monotony of video slots. If you want something different, it can provide a few hours of fun and occasional decent wins. There’s not a lot of substance to it and we really can’t see it as anything we’d be able to play in the long term.