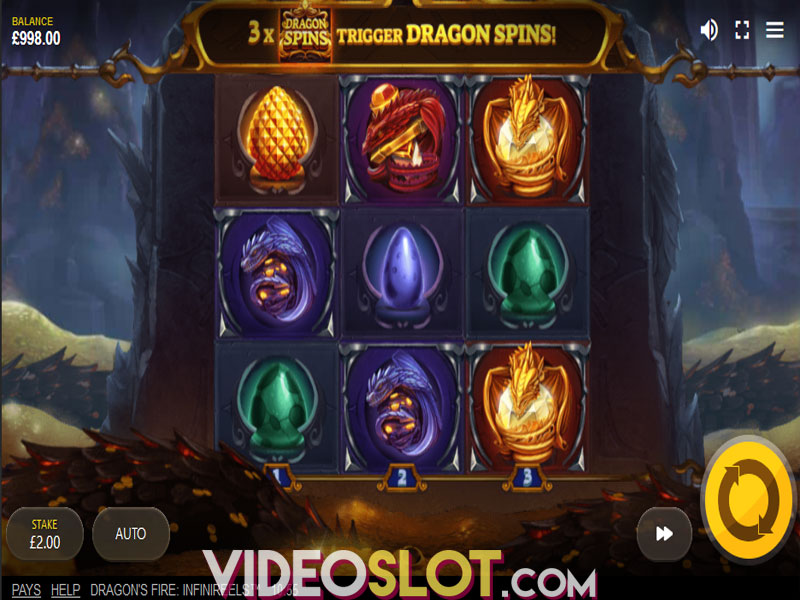 The Dragon’s lair is where you will be looking for riches in Dragon’s Fire InfiniReels video slot. You start on a 3x3 reel grid, but the reel formation increases, as well as the number of ways to win with every successive win. On your path, you will be helped by Fire Wilds, which appear randomly. As for the Dragon Spins feature, it comes with infinite free spins and only one randomly chosen symbol will pay during the feature. Playable from $0.20 per spin, the Red Tiger Gaming title offers a max win of 10,414x bet.

The InfiniReels game engine starts with 3 reels and 3 rows, delivering 27 ways to win. Each winning spin will increase the number of ways to win. Each added reel multiplies the number of winning ways by 3x. Your main task will be to land successive winning combos, and the reel grid will keep expanding. Note that every non-winning spin in the base game will reset the reel grid back to 3x3. Betting starts at $0.20, and you cannot wager more than $100 on a single spin.

As for the visuals, they are amazing. The moment you start playing the game, you will find yourselves in a Dragon’s lair, packed with gold. It may remind you of the Dwarf Castle, where Smaug from the Hobbit kept his treasures. Four different Dragons act as high-paying symbols – Golden, Red, Green, and Purple. Dragon Eggs act as low-value icons. The Dragon Eye is the top-paying regular symbol in the game. The Fire Wild will substitute for all regular symbols, and the Logo Scatter triggers Dragon Spins. Look for the Fire Egg, because it adds random multipliers when landed.

Thanks to the Fire Wild feature, one or two reels can be caught on fire. In this process, the reels can reveal Fire Wilds, which will substitute for all regular symbols. The Fire Egg can be landed on any spin, and will come with a random multiplier. The multiplier is applied on all current wins. If another Fire Egg lands, and the previous one is still active, the multipliers will be combined.

The Dragon Spins feature is basically the Free Spins feature, and is triggered once three Scatters are landed on the reels. Gamers get 8 free spins, but, before the feature actually begins, one of the regular symbols will be randomly chosen to be the only paying symbol that appears on the reels during free spins. Apart from the one regular icon, players can also land Fire Wilds, Fire Eggs that come with multipliers, and the 2+ icon. If landed, the 2+ symbol will surprise you with 2 extra free spins.

Dragon’s Fire InfiniReels is a very interesting video slot, but can also be a pretty frustrating game, once you expand the reels, and then lose all of them after a non-winning spin. The key to success is plenty of added reels combined with Fire Egg multipliers. This can get you to the top payout of 10,414x bet per spin. Now, it will not be easy to reach the maximum win, because it is a well-known fact that dragons do not like to share their treasures with people.