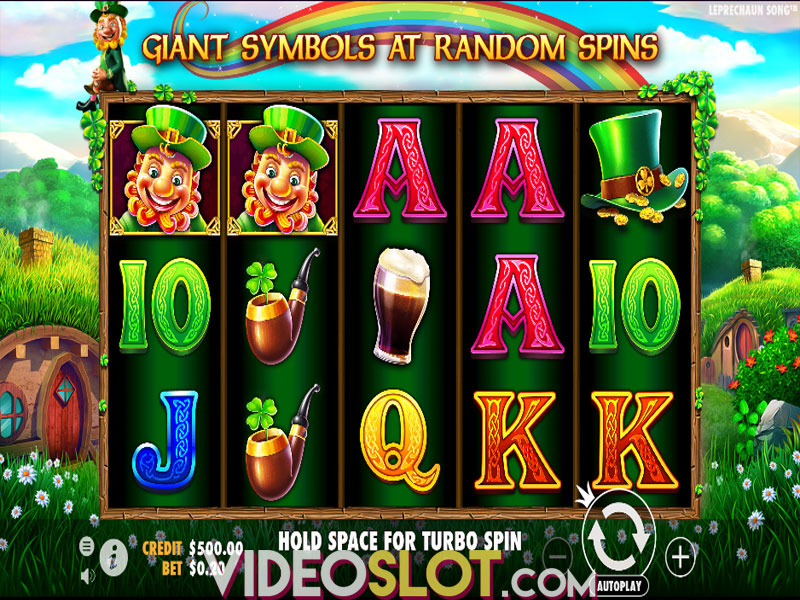 Embark on a thrilling journey to the Emerald Isle and come face to face with cheerful elves with the 2018 addition from Pragmatic Play portfolio Leprechaun Song. The vibrant game features 5 reels, 20 fixed paylines and a number of lucrative extras, such as Free Spins with multipliers, extra Wilds and giant symbols. In addition, you will benefit from randomly triggered bonus features, including Raining Wilds, Pick a Fiddle bonus and huge, 3x3 icons. The maximum prize up for grabs in a single spin is 160,000 coins.

The Pragmatic Play title uses 5 reels and 20 lines. Before you start the game, make sure to choose the number of coins per line and coin size by clicking on +/-. If you want to learn more about special features and payouts, press the 'i' button. To spin the reels automatically for a chosen number of times, click on Autoplay or on the Spin feature to set the reels in motion once you have selected the preferred stake.

The reels are home to several theme-related icons, such as the leprechaun himself, his pipe, his top hat and a pint of stout. The regular playing card symbols A, J, K, Q, 9, and 10 constitute the low-values. Wild is represented by a rainbow that will substitute for all other icons to create a winning, apart from Pot of Gold Scatters.

To trigger the Free Spins feature, you are required to land three Scatters anywhere on the first, third and fifth reel. Here, one of the following options will be randomly chosen.
Free spins where you choose from different mushrooms to win free games and multipliers until you see 'Collect'.

Coin Collector granting 15 free spins with a 2x multiplier. In this game, you will collect gold coins and once you have found five of them, you will win 5 additional spins with an increased multiplier.

Additionally, there are three special features that can be activated at random in the base game: Raining Wilds where more Wilds will be added to the grid, Pick a Fiddle where players choose 1 of the 5 fiddles to reveal a cash prize and Giant Symbol where large 3x3 icons will pop up on the reels to help you secure a win.

Leprechaun Song is a medium variance slot with an average return to player (RTP) of 96.46% so you can usually expect some average but fairly frequent wins. We must say that we are not very impressed with the outcome as the title is all about the free spins that are mostly hard to trigger. On the other hand, if you like the Irish-themed games, you may want to give it a spin for the sake of fun and entertainment.