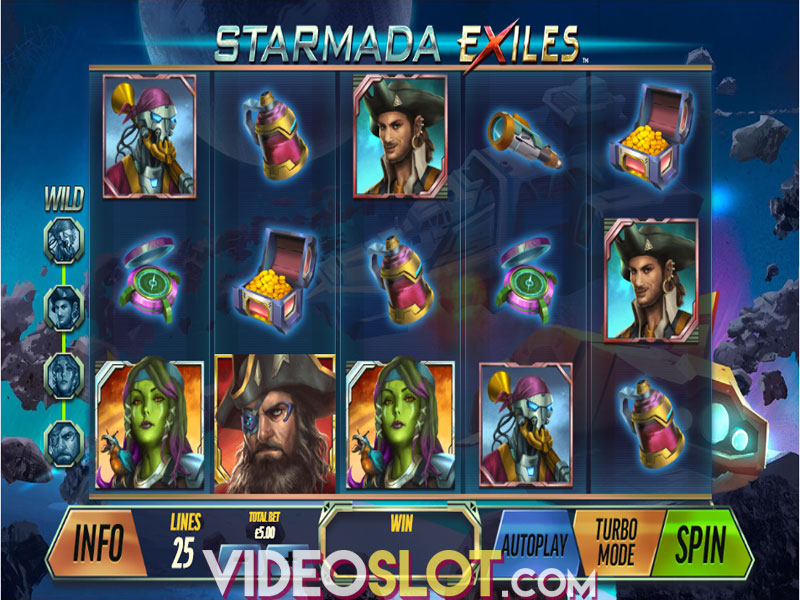 The seven seas have become small for all the pirate lords looking for plunder, so some of them were forced to go to space and rob alien planets in order to survive. The crew of Starmada Exiles is packed with experienced seadogs and if you join them, there will be plenty of spoils to share around. The Playtech title features five reels, three rows and benefits from 25 fixed paylines. Look for the Earth Scatters to trigger either Plunder Bonus or the Starmada Exiles Free Games feature with regular symbols upgraded to Wilds.

Space is the final frontier these days and if you want to succeed in cosmos, there are certain rules you need to obey, even on a pirate ship. The 2019 release features a standard 5x3 reel grid and offers 25 fixed paylines paying left to right from the far left reel, with three of a kind being the minimum for landing payouts. Betting is fixed at 25 coins per spin, but the coin value can be altered allowing you to wager from $0.25 to $2,500 per spin, which is a very wide betting range. Once you set the bet, click on Turbo mode to speed the reels up a bit. If you get tired of controlling your space ship, activate up to 100 automatic spins in Autoplay.

The Pirate Captain is the leader of the group and he gathered a pretty strange crew for this celestial adventure. A female Alien Pirate comes with her Parrot and a Robot Pirate is here as a soldier that handles a gun. Only the First Officer is from planet Earth. Of course, every pirate ship is packed with Treasure Chests and Rum Bottles. They will need a Compass for the voyage, as well as Guns and a Spyglass. The Map of Earth is Scatter that triggers features, while Wild substitutes for all regular symbols. There are also Emeralds and Rubies that can appear, but more about that later.

To trigger the Plunder Bonus, gamers need to land Scatters on the reels 1 and 3. It is a classic Pick Me game, where you need to pick one of Scatters to reveal a cash prize or to upgrade one of the high-paying symbols into Wilds for the next Free Spins feature. Also, an Emerald crystal can appear carrying a coin prize, but Emeralds start appearing when you manage to upgrade symbols into Wilds.

The Starmada Exiles Free Games feature is triggered when Scatters are landed on the reels 1, 3 and 5. Gamers get 10 free spins and Ruby crystals will start appearing on the reel 5. The Ruby is used to upgrade high-paying symbols into Wilds for the Free Spins feature, the ones that you didn’t manage to upgrade during Plunder Bonus. Once the freebies are over, Emeralds that you have landed will turn into Scatters, which will give you the chance to trigger free spins again.

We are positive that gamers will enjoy this space adventure, simply because it is fun and exciting and offers more than enough opportunities for tasty wins. The special features are pretty easy to trigger, especially Plunder Bonus, but sometimes the Starmada Exiles Free Games feature is not as rewarding as one could expect. All in all, we will advise all pirates among gamers to board the space ship of Starmada Exiles.