You are at: Home Playtech Sky Queen
back to all games
Sky Queen Slots Game
Game Details 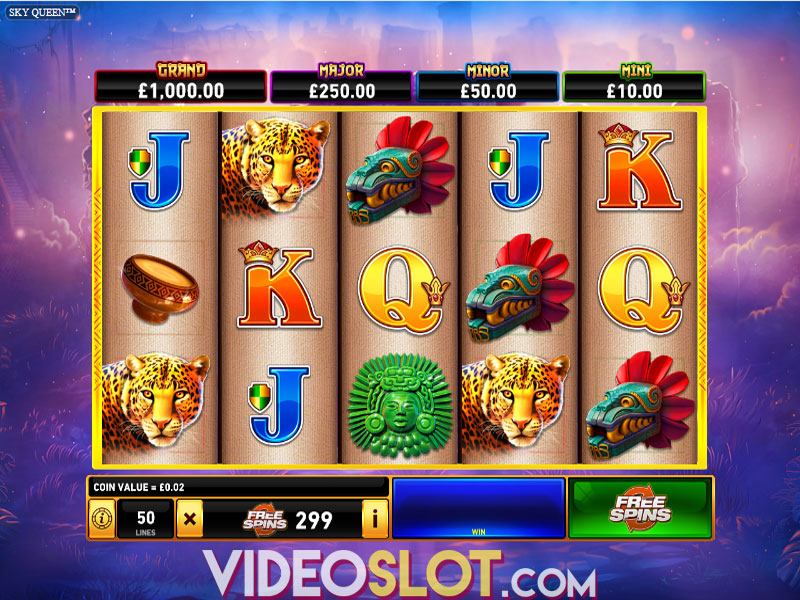 Once again we will test our luck in the mysterious jungles of South America, which were once the home of ancient civilizations. Plenty of temples are lost forever in the forests and plenty of them hide long-lost riches. Sky Queen is a Playtech 5-reel video slot that benefits 50 paylines and offers a couple of sweet special features, including the Free Games feature and the Fire Blaze Jackpots, which offers instant wins and four different jackpots.

The reels are set deep in the jungle, so punters should take great care when spinning the reels, because there are plenty of wild animals looking for pray. If you follow a few simple rules, you will be fine. The 2019 release features a standard 5x3 reel grid and offers 50 fixed paylines, which pay left to right, beginning from the leftmost reel. Land at least three matching symbols on a payline to start winning payouts.

Betting is fixed at 25 coins per spin, but the coin value can be altered, meaning that you can bet as low as $0.25 and as high as $500 per spin. There is the Turbo mode to speed the reels up a bit and the Autoplay mode for those of you who like when a machine does all of the hard work.

The Sky Queen is Wild that can substitute for all regular symbols. It appears on every reel but the first in the base game and on all reels in the Free Games feature and it can expand to cover the entire reel to help you land a win. The Temple is Scatter that triggers the Free Games feature, while the Sun is the Bonus symbol that triggers the Fire Blaze Jackpots feature. The Cheetah is the most rewarding regular symbol, followed by the Green Mask, a Totem Mask and a traditional wooden Plate. Playing cards represent low-paying symbols.

The Free Games feature is triggered when you land three or more Temple Scatters on the reels. Gamers will be awarded with 8 freebies and up to 50 coins, depending on the number of Scatters landed. It is possible to retrigger the feature, so you are looking at 16 freebies in total.

The Sun Bonus symbol will appear both during the base game and the Free Games feature. Every Sun symbol will be carrying a different coin amount. Land 6 or more of these to trigger the Fire Blaze Respin feature. Gamers get 3 respins and all the Sun symbols that are landed are held in place during respins. If a new Sun Bonus is landed, respins reset to 3 and the feature continues until no new Suns are landed or until all the cells are occupied with Suns. If that happens, the Grand Jackpot worth 2,000x the bet is yours. If not, you will collect coin wins from landed Suns. If the Sun has a Star on it, it means that you have won a Major, Minor or Mini jackpot.

Gamer will have fun playing the Sky Queen video slot for a while, but it will not occupy their attention for a long period of time. The visuals are not as crisp as we have expected, but the soundtrack is pretty genuine and might scare some of you. The features are pretty standard and, taking everything into consideration, the Playtech title does not offer that special something that will make the 2019 release to stand out from the crowd.