You are at: Home Playtech Scarab Queen
back to all games
Scarab Queen Slots Game
Game Details 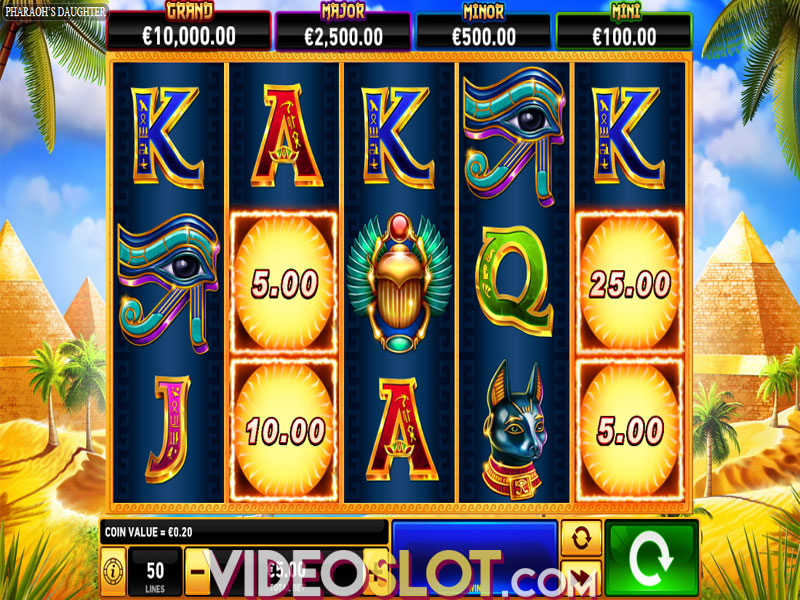 Scarab Queen is very similar to Playtech Sky Queen, only this time, instead of the jungles of South America, we will visit the Pyramids of Egypt. The 2019 release is a 5-reel, 3-row video slot that benefits from 50 fixed paylines. It offers a couple of rewarding special features, including the Free Games feature and four jackpots gamers can pocket. Playable from $0.25 per spin, the Playtech title boasts crisp visuals and a fitting soundtrack.

If you had a chance to play the Sky Queen video slot, you will understand the rules of the game in Scarab Queen in no time. The 2019 release features a standard 5x3 reel grid and offers 50 fixed paylines, which pay left to right starting from the far left reel. Three symbols of a kind are a minimum for landing payouts.

Every spin will cost you 25 coins and the coin value you will set for yourselves, so select the desired bet and play the Playtech title from $0.25 to $500 per single spin. The Turbo mode is there for players who want to speed the game up a little and Autoplay is for those who want to sit back and enjoy the show while the reels spin on their own.

The reels are set between the famous Egyptian pyramids, in the middle of the desert, so make sure you bring a lot of water once you start playing the 2019 release. Symbols that populate the reels include a Scarab Queen, which is Wild that substitutes for all regular symbols and appears on all the reels but the first in the base game and on all reels during the Free Games feature. As for regular symbols, you will come across the Eye of Ra, Scarabs, Bastet, Ankh, as well as playing cards. The Pyramid is used as Scatter that triggers the Free Game feature, while the Sun triggers the Jackpot Bonus.

Land three, four or five Scatters on the reels to trigger 8 free spins and win up to 50 coins, depending on the number of Scatters landed. During the Free Games feature, Queen Wild can appear on all the reels. It is possible to retrigger free games, so expect up to 16 freebies at once.

Land 6 or more Sun Bonus Scatters and you will trigger the Jackpot Bonus. The Sun symbols are locked in their positions and other reels respin. You are granted 3 respins and if you land a new Sun on the reels, respins are reset to 3. It continues until there are no more new Suns on the reels or you fill all the cells with Suns, which means that you have won the Mega Jackpot. Every Sun lands with a certain sum on it and once resins are over, all sums are collected. If a Star appears on the Sun, you will get some of the remaining three jackpots on the offer.

There is nothing new that the Scarab Queen can offer to spinners. The theme of the Playtech title is as old as time, while all the features that are on the offer can also be found in the Sky Queen video slot. Frankly, we expected more from Playtech, but it all comes to this: select Sky Queen if you prefer the jungles or play Scarab Queen if you want to visit Egypt. Everything else is completely the same.