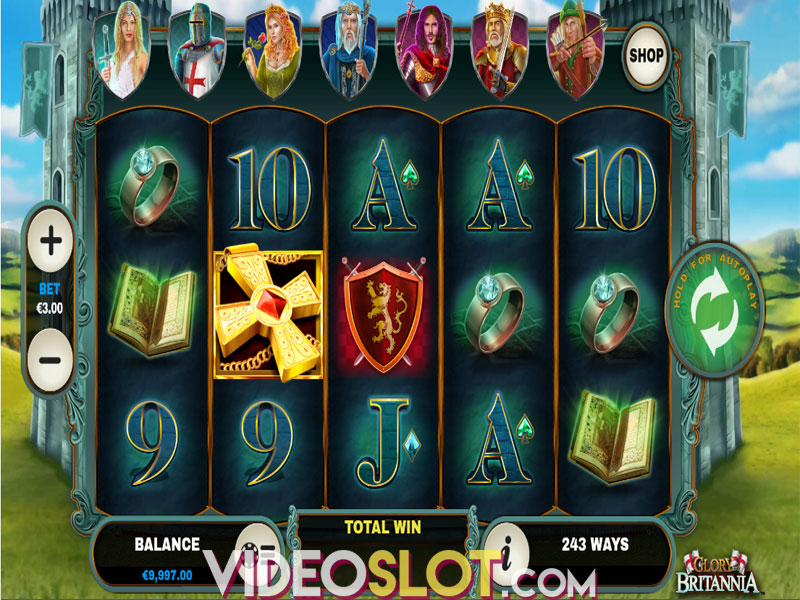 About Glory and Britannia Slot
Rating:

Another edition done in the Playtech recognizable style was released in February 2019 under the title Glory and Britannia. The developer takes us into the realm of legends, with a new take on the story of the glorious King Arthur and the Knights of the Round Table, providing an interesting gameplay which hopefully offers satisfying awards. You certainly won’t get bored while playing since the game has many features on display, alongside some standard Wild Substitutions, Scatter Pays and a Free Spins Round.

Set against the backdrop of Camelot, the 5x3 reel set displays 243 ways to win. As there are no conventional paylines, it takes at least 3 consecutive symbols from left to right for you to receive prizes. The only exception is Scatter, paying no matter where it hits. Click on “+” and “–“ buttons to adjust the size of wager, which can range from $0.30 to $60. You can start the game either by tapping Spin or activating Autoplay, so the game continues without interruption up to 100 times.

High-win symbols include a Royal Lion shield, a Crown and a Chalice, the latter two awarding 250 coins and the Shield paying out 500 coins for 5 of a kind. A Book and a Ring will each deliver 100 credits when 5 appear, while low-value icons depicted as playing card symbols 9 through Ace, award between 20 and 75 coins if 5 matching hit adjacent reels. Wild is represented as a golden Cross, landing only on reels 2, 3 and 4 and as a replacement for all icons but Scatter. The English flag stands for Scatter, issuing prizes when at least 3 appear anywhere. Obtaining 3, 4 or 5 Scatters will grant you 60, 150 and 600 credits.

It takes 3 Scatters anywhere to activate the Free Spins Round with 15 freebies and an additional reel, which will increase the number of ways to win to 1,024, giving you greater chances to score wins. Modify your gameplay in any way you wish, for the legendary characters overlooking the grid can do wonders. The Lady of the Lake, Merlin, Guinevere, the Templar Knight, Duke of York, King Arthur, and Robin Hood can bring on an array of features, should you decide to buy them. Take advantage from Respins during which magnificent things occur: extra Wilds land, low-value symbols are removed, Stacked Mystery icons appear, Spreading symbols cover the grid and reels become fully Wild. King Arthur and the Duke of York will appear during the Bonus to reward you with 20 extra spins and up to 5x Multipliers.

Though the base game in Glory and Britannia seems straightforward, astounding possibilities await within the Shop Feature. You can choose to activate merely one or all of them. This decision will influence the RTP which varies from 92.16% without activated features up to 96.14% should all be turned on.