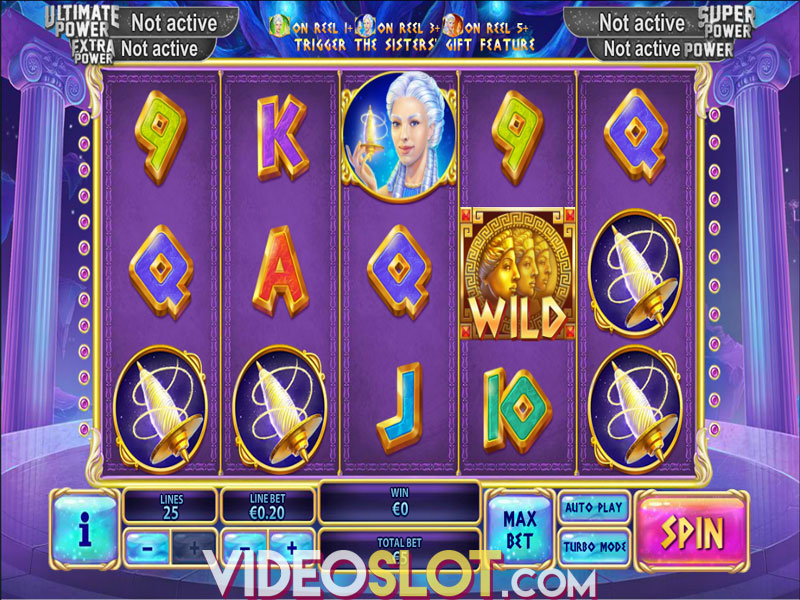 About Age of the Gods Fate Sisters Slot
Rating:

Let’s take a peek into the Greek temple where the Fate Sisters do their magic as somewhere inside 5 reels and 3 rows your destiny is written. Another sequel from the Age of the Gods slot series developed by Playtech, the Fate Sisters slot is played on 25 paylines and offers bonus games, free spins with dynamic multipliers and, just like all the other titles from the series, four progressive jackpots.

Inside a golden frame, housed in a splendent temple, there is a standard 5x3 grid with 25 adjustable paylines. A line bet can be anywhere between $0.01 and $100, meaning that a bet can go up to $2,500. In this mythology-themed Playtech’s slot there are 11 symbols. High value ones are the three sisters, Atropos, Lachesis and Clotho, along with two symbols represented as shears and swindle.

The game is also a home to Wild and Scatter which will help you hit bigger payouts and trigger the bonus features. Golden Wild substitutes for all the symbols except for Scatter represented as the blue maelstrom. When three or more Scatters appear anywhere on the reels, the Fates’ Portal Free Games feature will be triggered. Once the feature is activated you can choose one of three free spins features: Atropos’ Temple awarding 15 free games with a dynamic multiplier, Lachesis’ Temple granting 12 free games with freezing Wilds and Clotho’s Temple awarding 8 free games and random Wilds. If the sister whose temple is being played in appears anywhere on reel 3, three more free games are won.

Another base game feature is Sisters’ Gift, activated when Lachesis emerges anywhere on reel 1, Clotho on reel 3 and Atropos on reel 5 simultaneously. The Sisters' Gift feature awards one free respin during which sisters are frozen and pay as Scatters.

The Age of the Gods: Fate Sisters slot really gives you the opportunity to change your fate by winning one of four progressive jackpots (Power, Extra Power, Super Power or Ultimate Power) which can be randomly triggered on any spin. The Jackpot game is played at a 5x4 grid with 20 coins hiding jackpot symbols. You just have to find 3 matching ones and if the Fate Sisters are fond of you, the Ultimate Power jackpot will turn your world upside down. Anyway, the win is guaranteed.

The Fate Sisters slot is a medium variance game with multiple opportunities to win and it will please all kinds of players as it allows placing bets from only $0.25 up to staggering $2,500 per spin. The possibility of hitting a progressive jackpot increases the anticipation while playing this game, but if you don't succeed, there is always a chance of winning the 500 coin top fixed prize. Not much, but the rewarding bonus features which can be triggered at any point of the game still make the game worth your time and money.