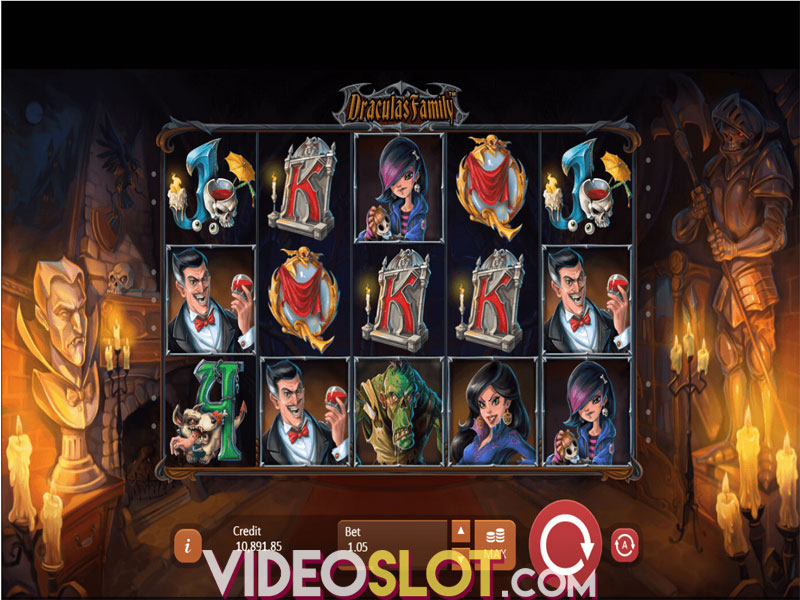 If you thought one vampire was not frightening enough, now there is a whole family of them. And looking at their appearance, they are exactly the sort of family you pray do not get seated next to you at the airport. Still, a video slot powered by Playson is something we cannot resist even if we end up a little short of cash or blood as a result. It shows off some great visuals and animations, not to mention fun special features like spreading Wilds and several types of free spins. The largest jackpot is worth 1,750x the stake. If you want a shot at their treasure, make sure to bring lots of garlic.

Dracula’s Family is a 5-reel, 3-row game with 15 fixed paylines. Players can set their wagers between $0.15 up to $105 per spin. Pressing the spin button activates the reels and allows you to play the title. If you are too busy trying to fend off a vampire trying to bite you, worry not! Gamblers can make use of the Autoplay option that lets you set the number of spins, as well as a loss limit and a win threshold.

The reels show off the various members of Dracula’s family, as well as playing card icons that were decorated for the occasion. You will find Dracula, his wife, their teenage daughter, and a decomposing ghoul, alongside J, Q, K and A. A pair of kids are Wilds, while the slot’s logo is Scatter.

Wilds only appear on the fifth reel. They replace all icons except Scatters and transform all symbols on two reels into eyeball Wilds.

Collecting three Scatters grants free spins. There are four different extra turn modes. You can only pick the first one to start with and after playing three special features with one free spin bonus, the next one unlocks, meaning you will have to play nine in total to unlock everything. All free spins grant 15 free spins to start with and can be retriggered for 15 additional extra turns.

Mad Multiplier – All wins are multiplied by 5x.

Eternal Love – During this bonus Dracula and wife symbols are merged into one high paying icon.

Delirious Reels – When a winning combination hits, the reels shift one reel to the left. With each successful shift, the multiplier keeps increasing to 1x, then 2x, 4x, and finally, 7x. This requires you to chain several wins together.

Dracula’s Family is a high variance game with an RTP of 95.55%. With a wide variety of bonuses and superb graphics, it has plenty of great things to offer. The highest potential win is worth 1750x the stake. Give it a try, you will not regret it.