You are at: Home NetEnt Funk Master
back to all games
Funk Master Slots Game
Game Details 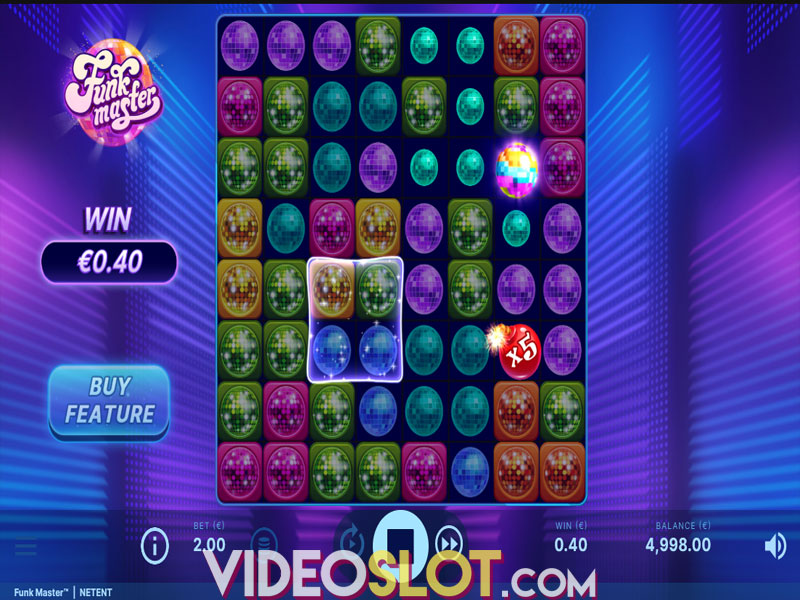 We are taking you back to the 1970s when disco music was extremely popular. Put your dancing shoes on and prepare for different Disco Balls that will appear on the reels. Wiggle your behinds to the sounds of music as you look for Dancing Wilds, Multiplier Balls, and Dancing Wilds Hotspots. Trigger free spins and expand the grid to get more chances of landing winning clusters. This high volatility game with an RTP of 96.04% offers you a chance to win up to 3,337x the bet per spin.

When talking about the base game, the 2022 release offers 8 reels, 8 rows, and benefits from cluster pays. To win a payout, punters need to land a cluster of 5 or more matching symbols, vertically or horizontally connected. A winning cluster activates the Avalanche feature, removing all winning symbols from the grid, and adding new ones to fill the blank cells. Multiple wins are possible in a single spin. Bet as low as $0.20 and as high as $200 per spin. Press the Fast Forward button if you want to speed the game up a bit. Activate up to 1,000 automatic spins in Autoplay.

If you are a fan of disco themes, you will love the NetEnt product. Blue and violet neon lights are in the background, while the reels are packed with Disco Balls of all colors. Orange and Yellow Disco Balls are leading the group of high-value symbols. The shinier the Disco Ball is, the bigger the win it secures. A multi-color Disco Ball is the Wild that substitutes for all regular icons. Red Bombs represent Multiplier symbols. Wilds also act as Scatters that trigger free spins.

When a Wild is a part of the winning cluster, the Dancing Wild feature is triggered. The Wild will not disappear from the reels after an Avalanche. It will move one position that is vertically, horizontally, or diagonally adjacent. It remains on the reels until it forms successive winning clusters. At the start of each spin, there will be a Dancing Wild Hotspot, covering a 2x2 area in the base game. If you clear all the symbols from the hotspot in a single Avalanche, a Dancing Wild is formed. During free spins, the Hotspot covers a 3x3 area.

Multiplier Bombs will appear both in the base game and during free spins, displaying 2x, 3x, 5x, or 10x multipliers. If a Multiplier Bomb is present on the reels during a winning cluster, it will be applied to the total win of that particular Avalanche. If more multipliers appear, they will be combined. When 3 Dancing Wilds appear on the grid at the same time, players will trigger 6 free spins. Players start with an 8x9 grid in free spins. When you unlock all Dancing Wilds Hotspot areas in free spins, the grid is expanded. The maximum number of rows is 12.

There is a good reason why NetEnt is one of the leaders in the iGaming industry. Funk Master is a perfect example of how the good people of NetEnt create excellent video slots that may not seem as such at first glance. Funk Master boasts excellent graphics and a fitting soundtrack. The features incorporated are fun and rewarding, while the wide betting range will attract both penny punters and high rollers. Action junkies will enjoy playing this game. We strongly recommend every one of you to test your luck with Funk Master.